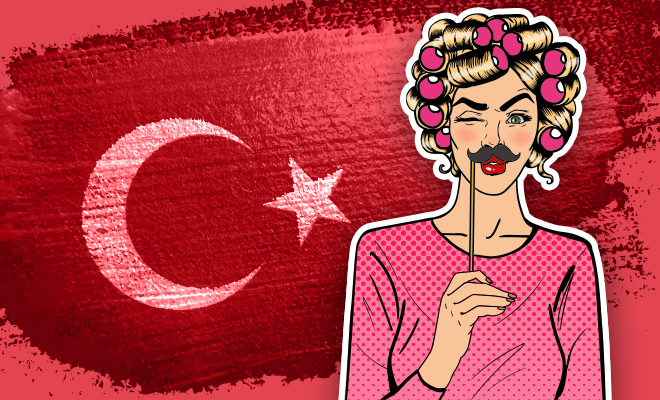 Turkish Women Called Out Their Men For The Inherent Misogyny By Subjecting Them To Comments We Hear All The Time. It’s Epic

It is no surprise that for centuries, men and women have been differentiated not just biologically, but also in terms of how they get treated and how much access they’re allowed to the world. Having been forced to settle into different patriarchal roles by the society, no matter where you go, women have been reduced to be no more than just enablers for men, to live, eat and unfortunately die at their mercy. As has not just been in India, but every part of the globe, including in Turkey, where the women have recently raised their voices to give men a taste of their medicine.

Hurling hashtags such as ‘Let men remain in their place’ on twitter, Turkish women mocked sexist comments and insults on the internet, to make men realise of the kind of restrictions they endure, the biases they face and unfair treatment they put their women through, and expect them to follow without a squeak. From how to sit to how to speak, how to earn and how to eat, women are issued a rule book of do’s and dont’s, that they must follow but there’s no saying that if they do, they will not be violated by men anyway. But not anymore, as the women of Turkey said to themselves, when they finally decided to stand up against the misogynistic ways of the men of their country.

As actresses, municipal workers, musicians and others come together to drop major truth bombs, Twitter on Saturday was found to be bombarded with snarky, smart, angry tweets from women that directed comments to men, in the same manner that women have been facing for a while.

Turkish Twitter is rocked by a new hashtag that roughly translates to "men must know their place", under which common sexist sayings are reversed to target men. It is creative, critical and (hopefully!) eye opening. #erkekleryerinibilsin

men should stay where they belong, the kitchen

Also Read : This Extremely Misogynistic And Stupid Instagram Account Is Probably A Joke. Here’s Why We Think That

Most of the tweets went like, “A man should not laugh in public,” “He was wearing mini shorts,” and “Learn to drive,” all of them dropping a taste of sexism to the guys. Another user, referring to the sexual harassment at work wrote, “What did he do to get that post? He must have slept with someone. In any event he is always wearing slim-fitting jeans,” and we could all recall our own instances of being held responsible for being hit on because we dressed in what we thought was flattering but apparently translated to ‘give me some’.

As women around the country came together to drop their two cents with this movement, we were alarmed by the kind of statistics that pushed them to it. With almost 413 women being killed by their partners or an ex in 2019, women are far from being safe in Turkey. In fact, this entire movement was directed at none other than the Turkish President Recep Tayyip Erdogan, who according to many in Turkey has ‘trivialised sexism’, and not been doing anything concrete to deal with it.

This after he and others under his government have time and again made comments like ‘a woman is incomplete’ until she is a mother, or urging them to have at least 3 kids, or prohibiting them from laughing loudly in the public. Guess this twitter thread was good enough to strike some sense into the men there, including their very own President.

Also Read : Dear Bollywood, Let Me Tell You Why Your ‘All Lives Matter’ Hashtag Is Tone Deaf And Makes You Look Bad