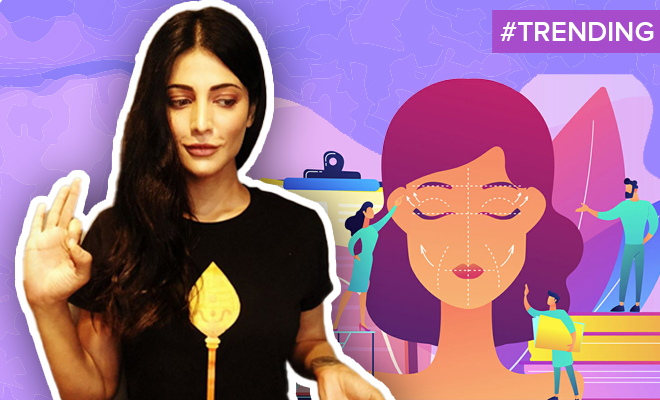 #Trending: Shruti Haasan Says Getting Plastic Surgery Was Her Choice. Yes, But Not Everyone Has A Choice

In school, I was chubby and I was told to exercise to lose all the weight. Then, in college, I shed all those extra kilos and I was told I am too skinny and look like a hanger. For some reason, people are obsessed with how a woman looks and what she does to her own body. Nothing is ever good enough. Thank you, beauty standards. People are always scrutinizing how a woman dresses, the length of her skirt, whether she has tattoos or coloured hair. If she is having sex, she is deemed a slut, and if she isn’t she is called a prude. There is no sense of “personal” when it comes to a woman. Everything is up for debate and discussion.

If we have to face all sorts of judgements and critical remarks about on a daily basis, just think about what celebrities must go through. It’s commendable how they live their lives under so much media attention. It’s usually a free for all with trolls analyzing their bodies and personal choices. When it comes to celebrities though, one of the most famed debates is plastic surgeries. Everyone is eager to know which actress has gone under the knife and gotten a nose job or lip fillers. People don’t seem to care about things that actually matter like casual sexism or global warming but the minute someone as much as mentions a corrective surgery, people’s ears perk up. When will they learn that it’s none of their business?

Normally, actresses try their best to hide the fact that they have been under the knife. Well, of course, who wants to deal with all that extra judgement? On the other hand, though, there are actresses like Shruti Haasan who openly address the fact that they’ve had work done. Shruti’s candidness is something we all love about her.

Earlier this year, Shruti posted a before and after picture acknowledging her plastic surgery. It stirred up quite the controversy and trolls had plenty of opportunities to nitpick at her insecurities. Seriously, do these guys have no other job? Although Shruti did not let anyone else’s opinion bring her down.

Now, in a recent interview with Hindustan Times, she addressed her plastic surgery once more and said it was a personal choice. She said that there was a time when she listened to the pressure that told her she had to look a certain way.

Shruti said, “There was a time I listened to the pressure. As far as my nose surgery goes, it’s a choice I made, even after my first film was done because my nose was broken. I didn’t like the way it felt. I didn’t like the way it looked. It was a personal choice. Nobody asked me to fix it. When it came to fillers… They said, ‘Shruti’s face is very Western, it’s very sharp, it’s very masculine.’ I was constantly hearing this and I did do non-invasive, temporary procedures, which I have been very open about.”

It’s like I said earlier, her candidness is commendable. She is one of the very few actresses ready to accept that she has been under the knife and honestly, just acknowledging the plastic surgery will probably make it less of a deal. Although, for Shruti maybe it was easier to accept because it was her personal choice and no one asked her to do it. However, that is not the case with many actresses who have got work done. I doubt a lot of them had a choice. There is a lot of pressure put on these women to look absolutely perfect for the cameras and if that means that they have to go under the knife, they are willing to do it. It could mean work is lost if they don’t.

She further explained, “If there are any actresses telling you they haven’t done it, they are blatantly lying because people’s faces don’t change that much. But it’s just something that I wanted to talk about. I don’t propagate it. What I’m trying to say is… It could be something from colouring your hair, like women who are Indian who feel they need to bleach their skin or dye their hair blonde or wear blue contact lenses…it’s the same thing, right? You don’t need to fit into anything, you do what you have to do. If a woman in her 40s feels, I want Botox because it makes me feel better, that’s her choice. And if she feels, this is not what I want, that is her choice. I felt I should be honest about my journey.”

I am not sure whether colouring your hair and getting botox is the same thing, but we see her point. The fact of the matter is that a woman should be able to do whatever she thinks is best for her body without having to deal with harsh and undue judgement.

Talking about harsh and undue judgement, Shruti has also been very vocal about body shaming. In the same Instagram post from a few months ago, she had said that commenting on people’s bodies and their weight is avoidable and that no one is in a position to judge others.

In this interview, HT asked her if she was affected by body-shaming? Shruti said, “I’m not bothered by an opinion that is founded by frustration or negativity but I thought it’s something that I should talk about because it’s not just me. There is a trend and there is a phase going on where it’s very easy to rip a woman down. Recently, there was a case of a woman being threatened with rape on social media. There is a constant judgment of women’s bodies, names and terminologies used by people that don’t even know them. So I felt that it was important to use my example and say that this is what I have done. Nobody has a right to criticise anybody.”

Body shaming is an issue we have been dealing with for a very long time. I don’t think people understand that women’s bodies are not created for the comment section. What they choose to do with their body is no one’s business but theirs. It’s about what makes them comfortable in their own skin and not what pleases everyone else.

Coming back to Shruti, I just think, she has done a fabulous job of owning her journey and fighting her own battles.

Priyanka Chopra Opens Up About Her Struggles And Her Nose Job. We Commend The Actress For Being So Candid!