#Trending : Reports Show Cases Of Triple Talaq Have Reduced By 82% Since It Came Into Effect Last Year. Finally, A Cause To Celebrate! 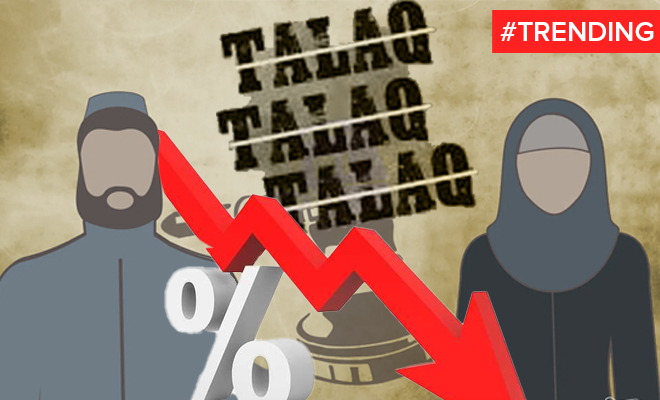 Call it an irony or a paradox, but it is true that change which is the most inevitable part of life, is also the hardest to come by sometimes. Especially when we’re talking about women and their rights in this world, which have somehow managed to stand the test of time by barely budging an inch in the right direction for the longest time. And so, in a world  like this, when even the slightest change is so difficult to come by, to celebrate an anniversary to a decision that was made a year ago in the favour of Muslim women, seems like reason enough to celebrate.

For the uninitiated, we are talking about the controversial Triple talaq custom that would earlier allow Muslim men under the Islamic law, to divorce their wives merely by uttering ‘talaq’ three times. This had left women at the mercy (or the lack thereof) of men, who would often abandon them in vulnerable states, with them having no right to overrule this decision or even be a part of it.

After several protests, struggle and debates, a year ago on 30th July, 2019, the government abolished #TripleTalaq.

Cases of Triple Talaq have reduced drastically since August 2019, bringing a new dawn of justice and equality for Muslim women.

The average cases per year have reduced from 11,263 to just about 1,000 in last one year. #MuslimWomenRightsDay pic.twitter.com/AZlXCZ0bo1

Also Read : #Trending : Man Booked By Police For Giving Triple Talaq To His Wife Because She Didn’t Agree To His Second Marriage. He Had It Coming.

A law that is already changing things considering it has put behind bars many men who have chosen to exploit their wives over trivial or disconcerting matters, for instance when the wife doesn’t agree to him having a second marriage and the likes of it. Union minister and senior party leader Prakash Javadekar also showing his satisfaction tweeted, “One year ago on 30th July, 2019, Narendra Modi government abolished #TripleTalaq. It has contributed to women empowerment and given them the dignity they deserve in our society. Now, #TripleTalaq Cases have dropped by 82 per cent since the law was enacted.”

Meanwhile, Smriti Irani, the Union Women and Child Development Minister also shared her joy as she said, “This day is not only meant for the Muslim women, but all women who want respect for their gender every day.” Law minister Ravi Shankar Prasad also spoke up to thank Prime Minister Narendra Modi for it was due to him that the Muslim women were rid of the practice of instant divorce.

With this, there isn’t just more autonomy for them in a marriage, but also a sense of security of knowing that one fine day, they wouldn’t just be asked to up and leave, all because they’re women.

Also Read : A Kerala-Based Woman Lawyer Has Petitioned Against The Punishment For Triple Talaq. Why Are Women Working Against Women?