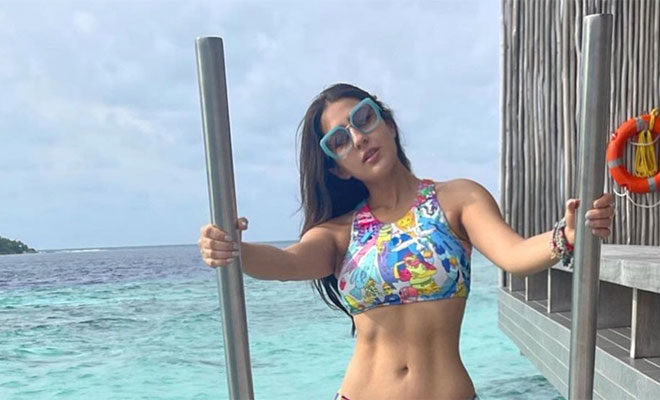 Since her debut, Sara Ali Khan has never missed a chance to amaze the audience. Whether it’s her acting skills in multiple films or her fashion choices, she keeps her fans entertained. Recently, she uploaded a few pictures and videos from her Maldives vacation flaunting her jaw-dropping physique in a cute bikini which has left netizens stunned. The Pataudi Princess is giving major fitness as well as fashion inspiration in her cartoon printed two-piece in which she looks like a diva straight out of a front cover of a magazine. The Simmba actress paired her bright multi-coloured print bikini with a pair of funky sunglasses, beaded bracelets and a blue finger ring, the comment section is filled with fans praising her look. We think it’s time to get some fashion tips from her.

She can be seen exploring the depths of Maldives while posing for pictures with her girl gang. “Sky above, Sand below, Sea Around, Go with the Flow,” the actress wrote. It’s not the first time when she uploaded pictures of herself in a bikini, she has been clicked and posted multiple times enjoying a good time in a pool with her friends and family. At this rate, Bollywood may get its very own “little mermaid.”

Also Read: Sara Ali Khan Used To Think Her Parents Were ‘Negative People’ And The Reason Is ‘Award Winning’!

Sara Ali Khan is known to be one of the few actresses who has ruled Bollywood since her debut, and all credits goes to her amazing acting skills. But few people know that she went through massive weight transformation before entering Bollywood. Seeing her being comfortable in her body after such difficult journey is inspiring for a lot of people. The actress was last seen in Coolie No 1 with Varun Dhawan which was a remake. She’s now waiting for the release of director Aanand L Rai’s Atrangi Re, in which she shares screen space with Akshay Kumar and Dhanush.