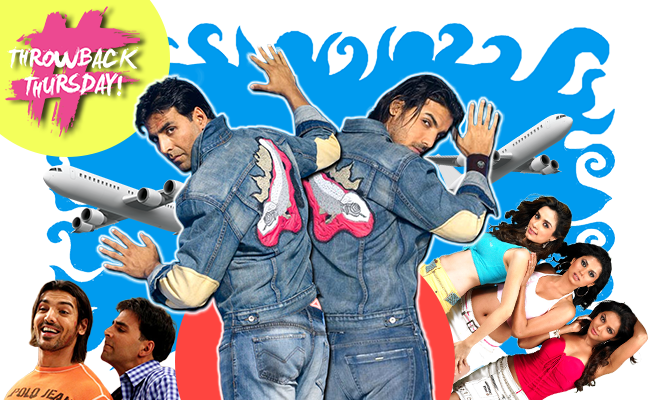 #ThrowbackThursday: If Garam Masala’s Mac Was A Woman, She Would Have Been Slut-shamed.

A few weeks ago, we stumbled upon Akeli na bazar jaaya karo and after revisiting it in 2019, I realised how thoroughly disgusting that song is. That’s how I started revisiting movies and songs every Thursday and decided to speak about things we failed to see back then. Week by week, I have watched sexism and harassment play out in the form of cinema as I dissect these lame excuses of art. So really, I don’t get shocked anymore when I witness the disturbing reality of some Bollywood movies, often brushed off as humour. Today, I am dissecting Akshay Kumar and John Abraham’s Garam Masala.

I don’t understand why there are so many Bollywood movies that trivialise infidelity (but only if the guy does the cheating!) I don’t understand at what point it became okay to be a womaniser. In Garam Masala, Mac (Akshay Kumar) is engaged to Anjali (Rimi Sen) but of course has no sense of loyalty or responsibility towards her. He is always hitting on women and getting touchy-feely with them as if he is the most single man on this planet. His work rival Sam (John Abraham) gets the promotion and perks that Mac deserved and that triggers all the chaos in the film. Just to live the “high life” and in shady ways, Mac gets access to a premium apartment, fancy car and three air hostesses who he pretends to engage and promises to marry.

He was fucking around with three different woman under false promises of marriage. When that movie was released, let me tell you this could have put him in jail. But then Bollywood thought it’s funny somehow. Imagine if your fiancé turns out to be a cheating pig; that will leave any woman heartbroken. Mac and Sam objectified those women and saw them as mere trophy girls. Mac gave no rat’s ass about his real fiancé and acted like a total asshole.

But that’s not the only thing I am upset about. How on earth does Anjali entertain this man? I mean, she should have thrown him out of her life long time ago. But what she does instead is forgive him and accept him as her life partner. A man who has no conscience and doesn’t empathise with another person is essentially not the kind of man we deserve or want. And I would have really liked if they had painted Anjali as a strong character. Why does it have to end on a stupid note where the man realises his mistake and gets the girl back? Is that why so many men are not scared of cheating? Because they think they will apologise and make everything okay, that is, if their partner finds out?

Either ways, the only good part about this movie is Mambo, their cook whose indifference towards the hideousness in the house is something I envy. With so much nonsense in this movie, I could have really used that talent and not feel as agitated as I feel right now.