This Woman Holds The Record For Having The World’s Biggest Mouth. We Didn’t Know That Could Be A Record 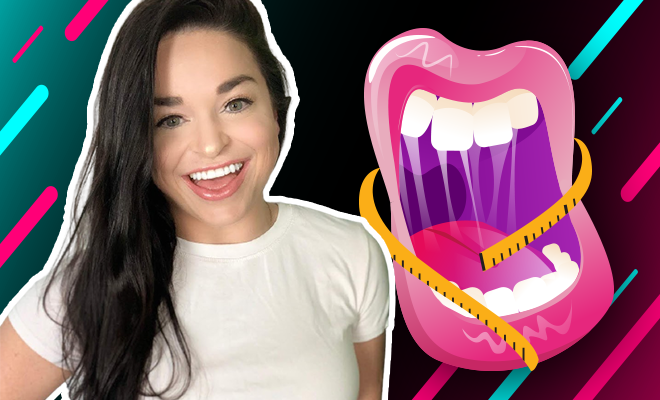 Normally, you’d be warned against people with big mouths. These are the people believed to be spreading rumours or talking a lot. But even then, a big mouth couldn’t be why you made it to the Guinness Book Of World Records right? Turns out, you can.

Surprising us all with an unusual world record,  this woman in Connecticut named Samantha Ramsdell who is 30 years old has made a Guinness World Record of having the biggest mouth in the world. Measuring up to 3.75 inches or 9.52 cms, Samantha’s world record is well, unique because we didn’t even know this was a record to be won. With more than 7.5 lakh followers on the social media app Tik Tok, Samantha is a hit among people for her large mouth.

In fact, Ramsdell goes on to also claim that she has a bigger mouth than the current Guinness World Record of 3.75 inches from upper to lower incisors, by calling hers to measure to almost 4 inches. With such dimensions, Samantha says she can easily stuff  her mouth with an entire sandwich without even eating it. And here, we are struggling to even fit one whole gol gappa in our mouths without spilling it all over the place.

Also Read : Instagram’s New Feature ‘Reels’ Is An Alternative To Tik Tok. But Will It Have The Mass Appeal?

Her Tik Tok followers keep getting entertained with her big mouth videos, where she often experiments by putting a whole apple in her mouth with so much ease and possibly a little space to spare. In some of the videos, she has even been captured using a tape to measure the width of her mouth.

In about 3 months, Ramsdell now caters to close to a million followers and she says, “I made a TikTok account in fall 2019 but didn’t start really consistently posting until Covid hit around April 2020. I started growing popularity over lockdown, I’d make a lot of funny face videos, comedy skits and singing parodies. But any video involving my mouth and the faces I can make always went crazy viral.” And considering how unusual that would be, we can see why people are intrigued.

Using this to make money now, Samantha has found a way to monetize her videos and shares, “It doesn’t sound like a lot but some of my top videos have over 50 million views, so if you do the math, it ain’t too shabby for eating subway sandwiches on camera!” Now there is a slick business plan she has got right there!