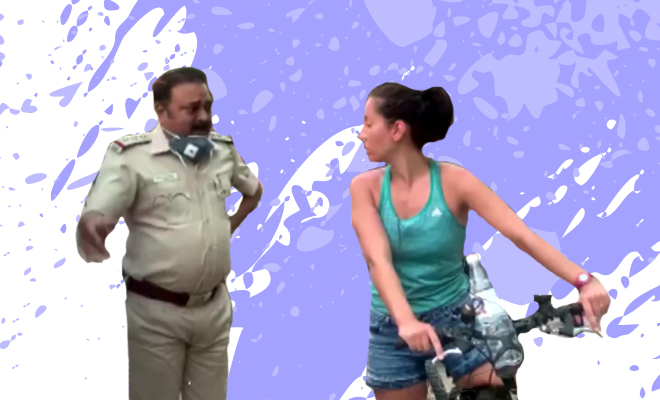 This Woman From Uruguay Argued With Cops In Delhi After They Stopped Her For Not Wearing A Mask. No One Is Above The Lockdown

You know for the life of me I can’t wrap my head around the fact that even after coronavirus has slain millions of people around the world, a few people still aren’t being able to understand the threat that it presents. I understand that this lockdown might get suffocating sometimes, it happens to everyone. But that doesn’t mean you just venture out on the streets as you please. How many times do they have to be told to stay off the roads? By just walking outside for no reason, you are putting not only yourself but so many others at potential risk.

The logic is not that difficult is it?  All we have to do is stay indoors and only step out when we run out of essentials like food and medicine. There, are 9,000 people who are infected with coronavirus, now is not the time to be breaking the lockdown.

The reason I am so annoyed right now is that just yesterday, a foreign national woman was stopped by the police for not wearing a mask while cycling on the roads in Delhi’s Southwest Vasant Vihar area. Now, we all know that most state governments have made wearing masks a compulsion and that is the need of the hour. But this woman, who was later identified as Valentina Obispo, the Head of Administration in the Uruguay Embassy.

Also Read: A Woman In Kolkata Licked The Uniform Of A Cop After He Stopped Her Vehicle. Where Is Our Sense Of Responsibility?

Head of Administration in Uruguay Embassy Valentina Obispo refuses to follow Lockdown / Wear Mask and talks sarcastic about our PM.

Lady: “You can’t say anything to me. You can’t ask me to wear a mask.”
"Your hounarable PM is very hounarable."#uruguayembassy #diplomat pic.twitter.com/kzkMPVJDJj

So, this diplomat thought it’s okay to break the law and go cycling. When she was stopped by a police team who was patrolling this area, she began to argue. She said that they couldn’t tell her anything nor could they ask her to wear a mask.

The police recovered a video of this delightful interaction which is now doing the rounds of social media. In the clip, you can see Valentina on a bicycle arguing with the Station House Offer. The policeman is trying to explain to her that she is breaking a government order by not wearing a mask, but she just continued to get defensive and argue.

There are a few things about this incident that I do not understand. How does a diplomat not understand that coronavirus is a damn serious threat, not only in India but everywhere around the world? Now, I know that her country Uruguay has not been hit as badly as the rest of us, but she is not in Uruguay at this moment. I don’t think anyone is above these lockdown rules that our government has laid down for us. It’s not an option but a necessity right now.

Also, I would just like to add that our policemen are doing their jobs of keeping us safe despite the high risks involved. If you are pulled over for whatever reason, cooperate with them. They are risking not only their lives but also the lives of their families to keep you safe, the least you can do is not argue with them.

This Team Of Six Policewomen Is Making Sure That People Do Not Flout Lockdown Rules. They Are Truly The Stars