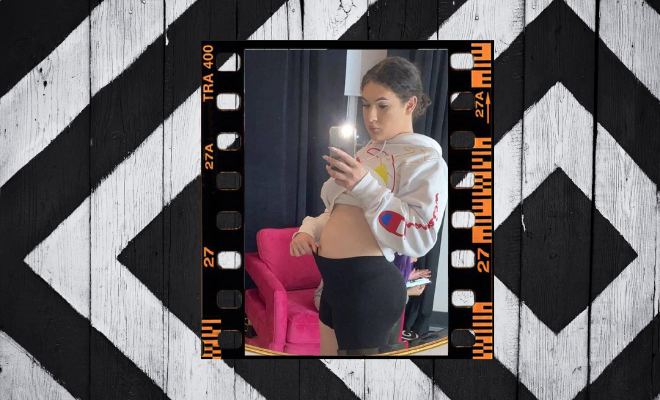 This Teen From The USA Was Born And Raised As A Boy But Is Now Four Months Pregnant. This Is So Interesting

Here’s the thing, I know that a few years down the line, I will have to make the decision of whether I want children. And despite what my mother and grandmother have to say, it is my decision. Up until this point, I know that I want two kids, a boy and a girl (one of which I will adopt) but well, nothing is set in stone and obviously, it’s not a decision one wants to make in haste. But then again, whatever I decide can never be as peculiar as the story about pregnancy I am about to tell you’ll. You see, a teenager in Boston is four months pregnant despite having male genitals. Shocked? Yep, we were too.

18-year-old Mikey Chanel, who identifies as a woman, became pregnant after discovering that alone with her male genitals, she was also born with functional reproductive organs. But let me start from the beginning.

Despite being raised as a boy by her family, Mikey always knew she was a little different. While she was still in her mother’s womb, tests showed that Mikey would be born a girl and so you can imagine everyone’s surprise when she was born with male genitals. But it was very clear to everyone that she was different than all the boys her age. Speaking of growing up, Mikey said that she would play with purses and put on makeup as a child and she never went through the “whole “boy puberty” thing”.

Transgender teenager who was born with male genitalia and raised as a boy is now four months pregnant after discovering she has functioning female reproductive organs
via https://t.co/Y7QqGb9LfE https://t.co/a97zkZYGFE

Mikey said, “’It was obvious to everyone that I was different right from the start. At age five I’d be playing with my aunt’s purses and putting on my mom’s lipstick. I never felt like a boy. I was quite effeminate and I never really went through a whole “boy puberty” thing. I only have a tiny bit of facial hair. I’ve always had a feminine-shaped body, with hips and a butt. I got bullied at school, everyone told me I was a f****t, a tranny, since third grade, before I even knew what it meant really.”

At the age of 13, Mikey came out as gay and later wondered if she might actually be transgender. However, little did she know that there was so much more to her story.

Last year, during some routine tests, the doctors found that she had internal female reproductive organs. Mikey said, “’I had been having a weird feeling after peeing and after sex, so they did an ultrasound of my urinary tract. They told me that I had a cervix, ovaries, uterus and fallopian tubes and that I could get pregnant if I wanted to. I actually thought it was a joke. I didn’t even know this was possible. I was like “Haha where are the cameras?”. Then they showed me my uterus on the screen.”

Mikey was diagnosed with Persistent Müllerian duct syndrome (PMDS), a rare condition where a person has external male genitalia, but female reproductive organs internally. The doctors advised Mikey to have an immediate hysterectomy. She said, “People with PDMS are susceptible to cancer and tumours and the risk is lessened if you have a hysterectomy. My male parts came back infertile but I was told that my ovaries were functioning. I was in a state of shock for a couple of weeks then I realized that I wouldn’t be able to have a child unless I carried it myself, and soon.”

Mikey said that she always knew she wanted to be a parent and so she decided to have a kid. She said, “it’s now or never I have to try and get pregnant.”

After deciding that she wanted to try and get pregnant, Mikey underwent a series of fertility procedures including ICSI and in which donor sperm is injected directly into a woman’s egg to create a fertilized embryo. But because she doesn’t have a vaginal opening, three fertilized embryos were implanted into her fallopian tube via an abdominal cavity. The doctors told her that there was only a 20% chance of it working and the next thing we know was that Mikey was pregnant. She is now four months pregnant and she described the feeling by saying, “I was so shocked but happy. I can’t wait to be a parent”. Further adding, “I feel more like a woman now than ever.”

I am so fascinated by her story. More than that though, I am glad she is speaking out about having PMDS and breaking all the stigma’s that surround the concept. We know very little about the condition since it’s very rare, there isn’t much research, and the patients are often found on accident. Which is why Mikey’s story also gives us a lot of insight. She wants to break social stigmas and gender nonconformity.

This is just so interesting.

This Woman Ran Over 1.5Kms In Just 5 Minutes In Her Ninth Month Of Pregnancy For A Bet. Okay, We Feel Lazy