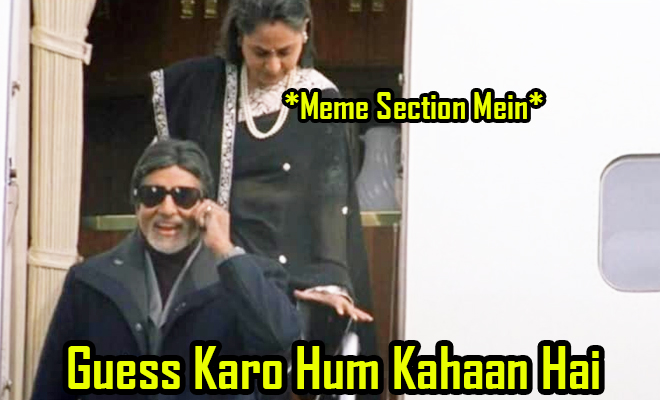 Kabhi Khushi Kabhie Gham is one of those films that will stay with us forever, for better or for worse. It lives on in the best form it possibly could – memes. Everything from Anjali’s hilarious antics to Poo’s iconic dialogues has been revamped as a meme, and we couldn’t be happier. After all, it’s going to be a long, long time before the loyal cult of followers that this film has established forgets about it. This is especially true for Twitter, where Kabhi Khushi Kabhie Gham jokes never get old. Now, a seemingly ordinary scene has been dug up and used in some of the most hilarious ways.

It also helps, we guess, that people still have a lot of time on their hands, given that work is yet to take off completely. The lockdown has had people become increasingly productive with memes and we guess this was one that was itching to take off. They say you’ve hit cult status in pop culture when memes are made out of you. K3G provides meme fodder like nothing else.

This scene where Amitabh Bachchan and Jaya Bachchan, or rather, the Raichands, visit Rohan to surprise him is hardly funny in its original context. But once Twitter users put their mind to something, they rarely fall short. Check out the memes that have come out of it.

When you need a document on urgent basis

Me *stops for a minute to tie shoe laces*

The one that got away:

"Bought a packet of lays chips"

Me after installing VPN : pic.twitter.com/jMKgtp30jz

Playing hard to get:

When its dark and you cant find the switch for your phone charger : pic.twitter.com/vh0qobWw5u

And finally, Who Wants To Be a Memeionaire?:

Someone Posted A Picture Of Oreo Bhajiya And We Can’t…