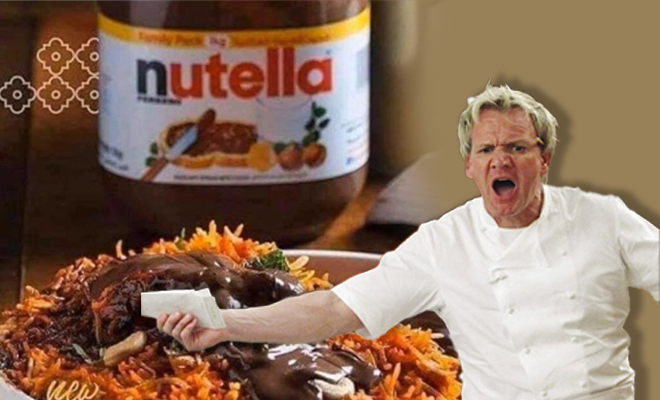 This Netizen Shared A Picture Of Nutella Biryani And We Think It’s a Horrible Combination. Would You Try It?

Growing up I had a thing for weird food combinations, and I can’t truthfully say I am over a few of them. Roti and ketchup, Maggi and sugar (don’t judge. Okay, but only a little), Lays and Mountain Dew (don’t mock it until you’ve tried it), Marie biscuit and ketchup and so many more that would really gross you out now. The thing is, I am an extremely fussy eater and my taste buds are just wired weirdly but there are a few things even I wouldn’t dare touch like this new food combination that is making the internet go berserk.

Oh yeah, this experimental combination will make you want to scream at the creator because it involves two items that people hold extremely close to their heart. Some might even say that these two food items, well one dish and one spread, are the holy grail for foodies and dessert lovers. Did you’ll guess? I couldn’t have made it any more obvious. I am talking about Nutella Biryani!

Grossed out already? I had the same reaction when I saw the picture. A netizen by the name of Muslim Memes took to Facebook to post a picture of a delicious-looking dish of biryani topped with generous amounts of Nutella. The caption of the post reads, “How excited are you for the new #NutellaBiryani.” Well, if I am being honest, I am as excited about this new creation as I would be if someone told me we were eating snails. I just feel bad for all those die-hard biryani lovers out there, this must feel like a slap on the face.

Also Read: This American Woman Uses Tang And Lemonade To Make A Cup Of Chai. Just When I Thought TikTok Couldn’t Get Any More Traumatising.

Check out the post and maybe try and curb your anguish:

How excited are you for the new #NutellaBiryani? 😁

Here’s the thing though, till today I always assumed that I would be able to pig out on just about anything with a dollop of Nutella on it. That was until the universe decided to resurrect this dish from hell (come on, it’s blasphemy). Now, I don’t know whether it’s the lockdown that has gotten to the person behind this page or they are just missing taste buds and a general idea of food pairings, but I am sure Nutella biryani tastes as bad as it sounds. It’s a dish that could be a task presented in Roadies or Fear Factor.

I won’t deny that I am a sucker for Nutella (I don’t think there is anything a spoonful of Nutella can’t solve) and I am extremely fond of biryani as well, because who isn’t? But the keyword in the whole thing is separately. I don’t think anyone in their right minds could eat a plate of biryani that is covered in Nutella. Well, except for maybe Joey Tribbani. I mean, if he likes Rachel’s half Trifle and half Shepherd’s Pie that according to Ross tastes like “feet”, he can eat anything.

Netizens had some amazing reactions to this picture that went viral. One person said, “I AM LEAVING THIS PLANET” and another one said, “The inventor should be imprisoned”. Yet another person said that” Y’all just bought yourselves a ticket to hellfire”. This one was my personal favourite.

Check out some of the other on-point reactions:

The bottom line is that Nutella biryani is an idea that makes me sick to my stomach. And frankly, the creators kind of deserve all the backlash they are getting just for merely suggesting it.

Though, I have one question for you- Are you gutsy enough?

Are You An Emotional Eater? Or Just A Foodie? Take This Quiz To Find Out