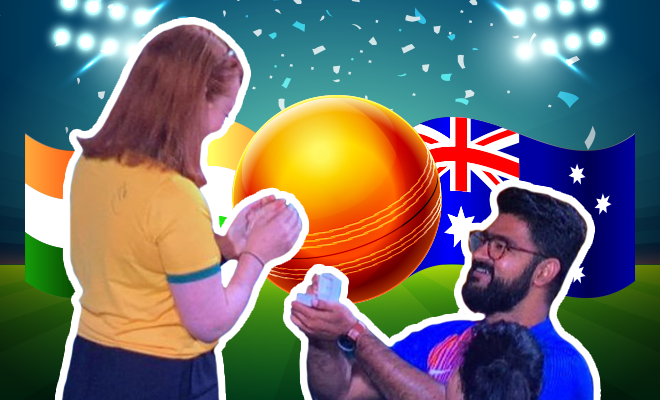 This Man Proposed To His Australian Girlfriend During The India v/s Australia Cricket Match. It’s So Romantic

As much as I deny it, deep down I am a hopeless romantic. For me, every milestone in a relationship counts and it needs to be celebrated. And the biggest milestone of them is the proposal. Every time I imagine a man asking me to marry him, it’s always a grand gesture. In a hot air balloon or a romantic spot near a fountain decorated with candles and rose petals. Basically, something straight out of a Nancy Myers movie. Or my future bae (after he’s done being stuck in a tree) can take notes from this man who proposed to his girlfriend at a cricket match. Unlike Pheobe Buffay who thought being proposed to in a stadium during a match was “tacky”, I find it extremely romantic.

Everyone knows just how competitive India and Australia are when it comes to cricket. In the latest match in Sydney, the two teams played against each other and India ultimately lost. However, it was a bittersweet loss for this one couple sitting in the stadium.

During the match, this Indian man got down on one knee, ring in hand, and asked his Australian girlfriend to marry him. The beautiful moment was celebrated by everyone present in the stadium and the crowd cheered loudly when the girl said yes. They then shared a long hug and kiss. Who doesn’t love a good proposal story? And this one was executed perfectly!

This is exactly the kind of grand gesture every girl dreams her boyfriend will plan for her someday. Besides, the video made me feel super single. The most adorable part was watching an interracial couple, who were clearly supporting the team from their country, come together. It’s so heartwarming. Not to mention, this couple now has this beautiful story about their proposal to tell their children and grandchildren.

We aren’t crying, you are.

Nurse On The Frontlines Of Coronavirus Got A Lit Proposal From Stuntman Boyfriend. This Is So Adorable