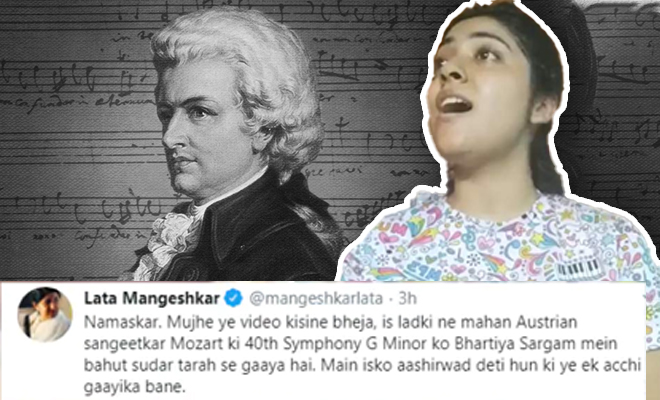 Seems like success and stardom, much like romance, come when you least expect them. It has been true for so many people whose talent reached millions and made them a star overnight. Justin Bieber, Lisa Mishra, the list goes on. Another one to have added to that list is this young singer who recently got the fame and acclaim not only from the netizens but also her childhood icon, Lata Mangeshkar.

When Samadipta Mukherjee shared a video of her singing the Mozart’s 40th Symphony with an Indian classical twist on 21 June on the World Music Day, on her Facebook and Instagram account, she wouldn’t have known that netizens would go gaga over it. The video went viral over the next few days and even got the attention of the legendary singer Lata Mangeshkar. It somehow reached the veteran singer who shared it on her Twitter account and praised the young artist for pulling off the desi cover of the iconic tune so perfectly.

She wrote in the tweet that someone forwarded her the video in which this young girl is singing the 40th Symphony in G Minor by the great Austrian musician Mozart beautifully using Indian sargam system. She also blessed her.

Also Read: A Visually Impaired Girl’s Cover Of A.R. Rahman’s Song Has Impressed Everyone Including The Maestro Himself. She’s Unbelievably Good.

I literally worshipped you, respected @mangeshkarlata
-Ji, from my childhood! Today, I have been blessed by the God herself! What else do I need! Keep showering your blessings on me, so that, I can reach higher levels in my musical journey! Pronaam! 😍🙏

Obviously, it was no less than a dream come true for Samadipta to get acknowledged and blessed by the music marvel herself and she replied to the tweet saying, “I literally worshipped you, respected @mangeshkarlata -Ji, from my childhood! Today, I have been blessed by God herself! What else do I need! Keep showering your blessings on me, so that I can reach higher levels in my musical journey! Pronaam.”

After Lata Ji’s post, more praises started pouring in. The tweet has garnered over 707k views and 62,000 likes as of now. A twitter user wrote, “This is incredibly good. She sings it so wonderfully.” Another tweeted, “She would make a beautiful Soprano. Such a sweet voice and sung with so much control”. A twitter user also said that being praised by iconic singer is a blessing in itself.

Her classical spin to the melody has blown everyone away especially since Mozart’s 40th symphony is a particularly complex composition. It isn’t an easy one to sing, let alone infusing it with the Indian sargam. She truly did a commendable job. We are listening it on loop!

Also Read: Spread Positivity: Falguni Pathak Entertains Her Neighbours By Singing From Her Balcony. Her Voice Will Give You Goosebumps