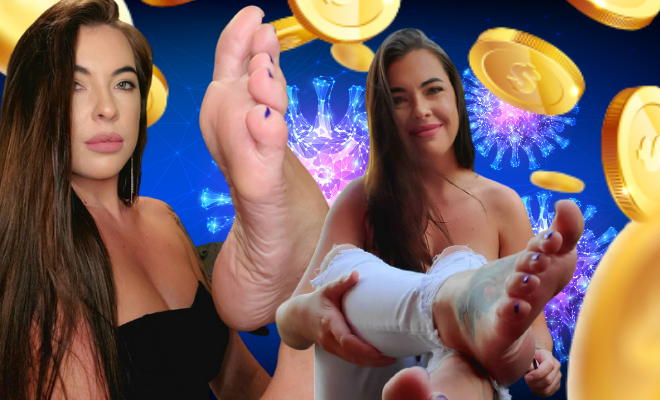 This 23-Year-Old Woman Earns A Rs 43,000 A Week By Selling Pictures Of Her Feet On Social Media. It’s Making Us Consider Changing Professions.

Lately, social media has been one of our only escapes. I think I spend more than 40% of my time mindlessly scrolling through my social media feeds, internally laughing and cringing at things I know only a handful of people find funny. But hey, welcome to the life of a millennial. Along with hilarious and entertaining, another word that can be used to describe the virtual world we practically live in is bizarre. I don’t know about you but I have some truly absurd things on Instagram and Twitter. Like this woman from the USA who sells pictures of her feet online for a living. She is a foot fetish model. Before you judge her, read on to know just how much she makes doing that. It’ll have you reconsidering all your life decisions in no time.

We’re always on the lookout for ways to make a little extra pocket money, aren’t we? Especially now that coronavirus induced lockdown has cost a lot of people a lot of work. The plus side is that social media has opened up so many new avenues for us all. We could be food bloggers or video game reviewers and earn a good living. However, in all my social media-using adult life never have I come across someone doing something so absurd to earn money. Well, maybe except the time I watched videos of a woman who makes a living by pretending to be a puppy. A foot fetish model seems very vanilla compared to that, doesn’t it?

Anyway, the woman we are talking about today is 23-year-old Kacey Marie from Georgia, USA. She is a receptionist and model by profession. According to reports, she was very curious about how people make money by selling pictures of their feet online. She decided to try it out herself after doing some extensive research.

A few weeks into it, she said she realised that the foot-fetish modelling game was already saturated with people. Who would’ve guessed that? But with the help of her partner, she was determined to give it a go. Kacey now earns by providing photos and videos of herself crushing things with her feet, scrunching her feet in a certain way, and posing with both her feet and face in the picture

Kacey was quoted by Metro UK saying, “I decided that this would be a fun hobby and outlet for me. I also hoped it would bring me some income. My partner and I agreed on no nude or pornographic content. I’ve always wanted to be a model but was fearful of putting myself out there. I started off by only posting my feet. I was welcomed into the foot fetish community with open arms.”

Also Read: This 21-Year-Old Social Media Influencer Earns A Six Figure Income Each Month By Pretending To Be A Puppy. I Am Clearly In The Wrong Profession?

She set up her account in June and already has around 45,000 followers. Yep, apparently, a lot of people have a foot fetish and that worked out great for Kacey. Believe it or not, she makes £460 (Rs 43,000) a week by selling pictures of her feet online. Well, I am honestly considering a change in profession. Are you with me?

All this got me wondering, what is exactly is a foot fetish? So, I did some good old research myself. According to a Cosmopolitan article, a foot fetish, also known as podophilia, involves a “heightened and specific sexual interest in feet and/or footwear”. Basically, it could be anything from looking at feet to dressing them up or from licking and sucking them to involving them in sexual acts. Although I am not sure how that would work. As it turns out, this is one of the most common fetishes.

A Girl On A Twitter Thread Asked Fellow Women What Was The First Thing They Noticed In A Guy. Someone Straight Up Said Money