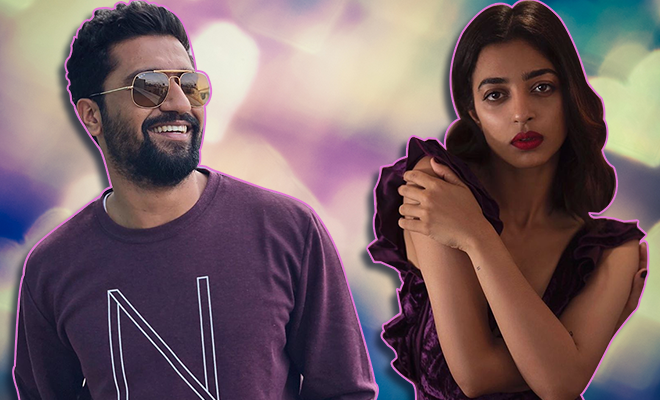 The Suspense Is Killing Us! Radhika Apte Revealed Vicky Kaushal Is In A Relationship.

We all have that one friend who spills the beans on the secrets you had guarded with your life. Your life’s most embarrassing moments or who you’ve been dating. Radhika Apte is that friend for Vicky Kaushal. While there have been linkup rumours between Vicky Kaushal and Katrina Kaif, that potential love story we were hoping would take shape, apparently didn’t. And all of us have been thinking that the adorable cutie is up for grabs, turns out he has been seeing someone all this while!

Radhika Apte revealed in a chat show that the Uri actor has been in a relationship and advised him to make it public. “Vicky is seeing this really lovely girl. He is so lovely. They should come out,” she said, leaving all of us in disbelief! You know how frustrating it is when someone gives you just half of the information and then you cannot stop thinking about it! That’s exactly what Radhika Apte has done to us!

Meanwhile, there’s buzz that the “lovely girl” might be the Beyond The Clouds actress Malavika Mohanan. A video recently surfaced on Instagram in which Vicky and his brother Sunny were seen having a meal at Malavika’s home, along with her mother and brother.

A source told an entertainment website, “Vicky, Sunny, Malavika and her brother have known each other since they were children. They enjoy each other’s company and bond real well. But Vicky and Malavika apparently, have become extremely close. Sunny and Malavika are also good friends. In Mumbai, no matter how busy he is, he will make it a point to drop in for lunch or dinner at Malavika’s home, where she stays with her parents and brother. Now it seems that their relationship is becoming stronger and developing into something more intimate.” However, we cannot jump to conclusions on the basis of just this bit. We mean, wouldn’t you have dinner at your friend’s place? That doesn’t confirm the speculations at all. We hope Vicky Kaushal unwraps his relationship for the world now, because he has all our attention! Also, if he’s going to break my heart, can he not draw it out? It’s pure torture

ALSO READ: Bhumi Pednekar Just Revealed This One Thing About Vicky Kaushal That Will Make You Love Him Even More!

Meanwhile, on the work front, Vicky Kaushal will next be seen in Udham Singh’s biopic and Meghna Gulzar’s next based on the life of war veteran Sam Manekshaw. He will also be seen in Bhanu Pratap Singh’s Bhoot Part One: The Haunted Ship. After this, he has Karan Johar’s multi-starrer Takht in the pipeline, alongside Ranveer Singh, Janhvi Kapoor, Kareena Kapoor, Alia Bhatt, Anil Kapoor and Bhumi Pednekar.