The Official Trailer For Four More Shots Please! Is Out, And It’s Going To Be Bolder And Sassier 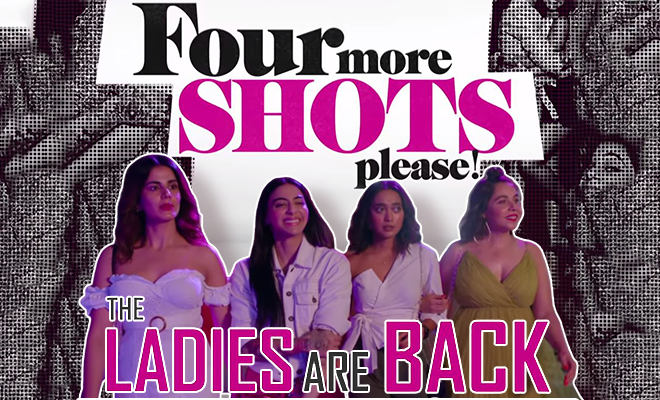 There are just a handful of things right now that are helping me absolutely not disintegrate during this long and seemingly endless lockdown – one that that has already had me in the house for two weeks. These things include OTT platforms, video calls to sleeping in till dusk turns into dawn, I have been consuming content more than ever. And though, we are being told that this social exile shall most likely end on 14th of April, in case it doesn’t or if  it does and you’re having withdrawal symptoms of bingeing too hard for too long, we have another show coming at your way that is not going to disappoint!

Amazon Prime just dropped the trailer for their second season of the hit show, Four More Shots Please!,  and we are thrilled and already sitting at the edge of our beds waiting for this one. The second instalment, that is set to drop in on 17th April has the four female leads – Sayani Gupta, Kirti Kulhari, Bani J and Maanvi Gagroo back in action.

As the 3 minute trailer takes us back to where we left the first season, it also takes us to an international location and that is Istanbul! Starting off as a much needed reunion of the 4 best friends, we see Sayani Gupta, Kirti Kulhari and Bani J follow their steps to Istanbul in search of their fourth friend, Maanvi Gagroo who is seen canoodling herself in a pay for love kind of a situation. And that’s okay, because who are we to judge?

Also Read : Four More Shots Please! Gets A Season 2 And Here’s What We Are Expecting From The Show

The trailer takes us back into the lives of Umang, Anjana, Damini and Siddhi and makes us wary about the many power and societal struggles we as women still face. And we are hoping, it again would shed a light on a few prevalent prejudices women undergo in their everyday life. With the showing taking it a notch up, what with the kind of screenplay being blunt and sassy, we are definitely looking at a more bolder version this season.

Anjana who seems to be still together with her previous season’s love affair, Arjun Nair (Ankur Rathee), is later seen in kind of a fix with the introduction of a new character this season, played by Samir Kochhar. Meanwhile, Damini still oscillates between Dr Aamir Warsi (Milind Soman) and Jeh Wadia (Prateik Babbar), and Umang is seen going strong with Lisa Ray’s character, Samara Kapoor. Shibani Dandekar would also be seen making a debut in the second season.

Siddhi, on the other hand, seems to be the revelation we all hoped for in this season. Breaking out of the pretty and perfect rut that society had kept her in, her character evolves and explores various sides to her sexuality and she is not afraid to call a spade a spade in this one. All in all, a series that promises equal parts drama, entertainment and social empowerment, we can’t wait to tune in to the second season. And hopefully we’d be able to do with our girlfriends, as a way to end this quarantine and welcome ourselves back to the social world, with Four More Shots Please!

Also Read : 5 Hilarious Shows You Can Watch Reruns Of During This Lockdown