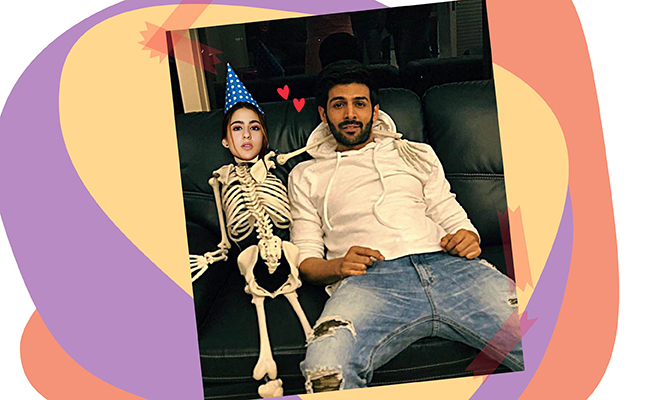 Yesterday was Valentine’s Day and our stars were out and about making grand or gentle declarations of love for their better halves. You can read how they expressed their lurve here.

Jumping on the bandwagon was Kartik Aaryan who cheekily talked about being single by posting a picture of himself with his ‘date’. Except that in this case, the date was a skeleton. And while it was done in good humour, the internet immediately picked on this and started suggesting alternatives. Of course, given that Sara Ali Khan has previously expressed she might be interested in him, several comments on the post asked Kartik to, well, ask Sara out.

Haha.. now every1 knows who wants to date you.. & every1 is waiting for that date 😉💕❤ #SaraAliKhan #Sarthik #Lovebirds

Things got interesting in 2018 when Sara made her first appearance on Koffee with Karan and admitted that she might have the hots for Kartik Aaryan. Kartik reacted to this saying he would love to go out for a coffee sometime. At a screening, Ranveer Singh played wingman and introduced the two to each other and there were smiles and plenty of blushing when this happened.

So obviously, when the current heartthrob of the nation has expressed interest in you, the internet will swoop in to play cupid. And we can’t wait to see how this unfolds.