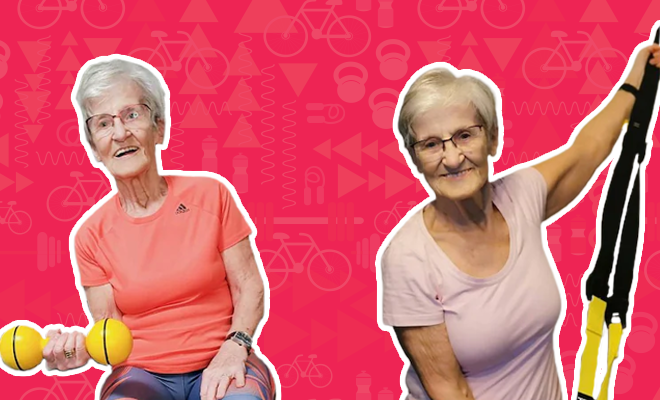 The 81-Year-Old German Lady Is A Fitness Star On TikTok! She’s So Inspiring

Some people start working out as young as in their teens, others (like me) delay it until they are in their 20s and only when they in desperate need of some discipline and fitness in their lives. And then there are people like Erika in their 80s, arguably more driven, fit and in shape than most of us combined, setting crazy standards for all of us to learn from.

In today’s dose of Monday motivation we have a spectacular 81-year-old woman from Germany, whose fitness drive is enough to put all of us youngsters pretending to ‘werk it’ out of business with her killer dance and workout videos. Standing true to the ‘age is just a number’ adage, Erika Rischko is setting unbelievable goals as she continues to nurture herself with regular and inspiring workout.

Posting her first video last year when Germany went into a lockdown, Erika Rischko has now released more than 100 videos on social media, recording herself slaying as she carries out minutes long plank with ease, and looks like a vision as she does her pull ups, push ups and intense cardio. Meanwhile, we struggle to even bring groceries home…

Also Read : Milind Soman’s Mom Celebrated Her 81st Birthday With Push-ups And A Jaggery Cake. She Is Fitness Goals

She spoke with Reuters and said, “Move and do something! Don’t just sit in a corner and mope. That’s just the worst.” It is clearly a personal attack for all that slacking around I do. Except, the woman had a point and after watching her take her health and fitness so seriously even at the age of 81, we had no reason to sit on our ass and munch on junk all day long.

With more than 125,000 followers on TikTok, Erika Rischko takes on several trending fitness challenges on social media, aces them like a pro and even records herself while doing it. She shares, her daughter helps her with it, often recording her mother while she goes on to smash all stereotypes and amaze us. She even indulges in dancing with her husband and says, “I’m really happy. I’ve never been as self-confident as I am now.”

Guess, we know what we have to do now.

Also Read : This 74 YO Granny Breaks Ageist Fashion Rules By Tossing Her Drab Clothes For Sexier Outfits. We Love Her