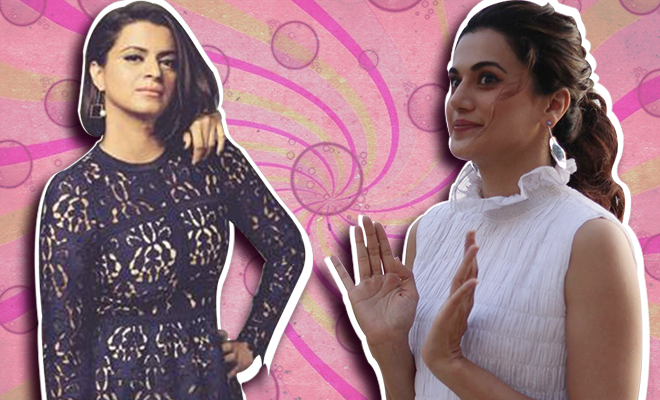 Warning! Here’s another article on the very boiling Bollywood drama that is going on and yes, it includes Kangana Ranaut and her sister Rangoli Chandel, so you might as well get yourself some popcorn.  While most of Bollywood celebrities run away from controversies, Kangana Ranaut is literally looking for one to walk into. We all know Kangana Ranaut’s recent spat with journalist Justin Rao which started at her upcoming film, Judgemental Hai Kya’s song launch. And while we do understand sister Rangoli Chandel coming to her defense, she has been going to war with ace actress Taapsee Pannu, calling her a ‘sasti copy‘ of Kangana. Also, she’s going to war with anyone at this point.

Also read: Kangana Ranaut Says Her Fight With The Journalist Was A Huge Mess. Maybe We Should All Let It Go

It started when Taapsee Pannu appreciated the trailer of Judgemental Hai Kya and tweeted about it. Later Rangoli Chandel retweeted and called the Game Over actor a ‘sasti copy’ of Kangana. To which many of Taapsee Pannu’s friends came to her defense including director Anurag Kashyap and asked Rangoli Chandel to not make such derogatory comments.

Come on Rangoli.. this is going too far.. this is really really desperate.. I really don’t know what to say to this . Having worked with both your sister and Taapsee .. I just don’t get this ..praising the trailer means praising all aspect of it. Which includes Kangana https://t.co/tkG5KwyFHi

In a recent interview with Mumbai Mirror, Taapsee had explained everything about the spat between Rangoli Chandel and her. The talented actor mentioned that after Rangoli made the ‘sasti copy’ comment, many of her Bollywood friends wanted to speak up. But, it was Taapsee who didn’t want to get into a war of words and stopped them from doing so. The Manmarziyaan actress also revealed that she has also struggled to get where she is. Hence, no one can use the ‘nepotism’ card against her, which the sisters are using against many other celebrities.

“Not just Anurag, a few other close friends from the industry also wanted to retort, but I stopped them because I don’t want to give her any mileage on my behalf. She can’t play the nepotism card with me because I’ve also struggled to reach where I am today. I didn’t want to engage in a word battle because I would not be able to match their language. I didn’t know there was a copyright on curly hair, which I was born with, and honest opinions. I’m not going to apologise for it. As far as being “sasti” is concerned, Kangana claims to be the highest-paid actress, so I guess I am the “sasti” version,” said Taapsee.

Taapsee Pannu also explained about the incident where she said Kangana needs ‘double filter.’ Taapsee said that she was the one who needed a brain-to-mouth-filter and stated that she never meant it in a derogatory manner. Taapsee said, “We are both opinionated and speak our mind which is a good thing except that sometimes it lands us in trouble. I had said it in a positive manner and not meant for it to be derogatory. In fact, I have often said Kangana’s an actor I look up to, my conscience is clear. It was weird to target me, that’s why it backfired.”

On the professional front, Taapsee Pannu is gearing up for her next releases Mission Mangal and Saand Ki Aankh. Whereas Kangana Ranaut is all set for her next film, Judgemental Hai Kya.