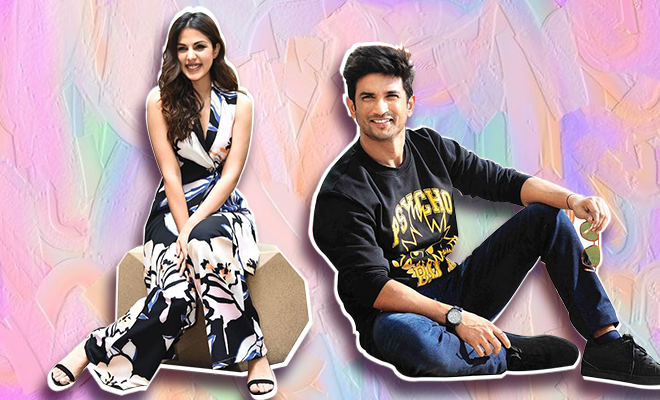 Sushant Singh Rajput Gifted This To Girlfriend Rhea Chakroborty On Her Birthday. We Want A Boyfriend!

An average day at work involves delving deep in to the story of the launch of a new star, who’s dating who, which actor is doing a certain new project or even break-up and patch-up rumours. Anything can happen in Bollywood within a short period and it is definitely a crazy place to be in! Speaking of relationships, another rumoured Bollywood couple, Sushant Singh Rajput and Rhea Chakroborty are making headlines by being spotted together in town or going on a secret vacay. But this time actor Sushant Singh Rajput did the most adorable thing for Rhea Chakroborty on her special day!

According to a report in Mumbai Mirror, Sushant Singh Rajput has gifted his ladylove a platinum pendant that actress Rhea Chakroborty is seen wearing these days! Even though Sushant and Rhea have not made their relationship official, but the rumoured lovebirds are definitely busy painting the town red with some very expensive baubles! After taking a romantic trip to Ladakh together, Sushant hosted a surprise party for Rhea on her birthday. This sweet gesture is something we all want from our partner! *furiously downloads Tinder*

Speaking about their link-up, the insider added that Rhea and Sushant have been spending a lot of quality time lately. “They are still calling each other ‘good friends’ but reality is that they are already seeing each other. When Sushant is not in town, he is chilling at his Lonavala house, Rhea also accompanies him sometimes. They are keeping their relationship hush-hush for now before taking it to the next level,” said the source.

On the work professional, Sushant Singh Rajput is awaiting the release of Chhichhore. While Rhea, on the other hand, will be next seen in Chehre.