Spread Positivity : In Kerala, A Woman Ran Behind A Bus To Stop It And Get A Blind Man On Board And It Is Heart-Warming 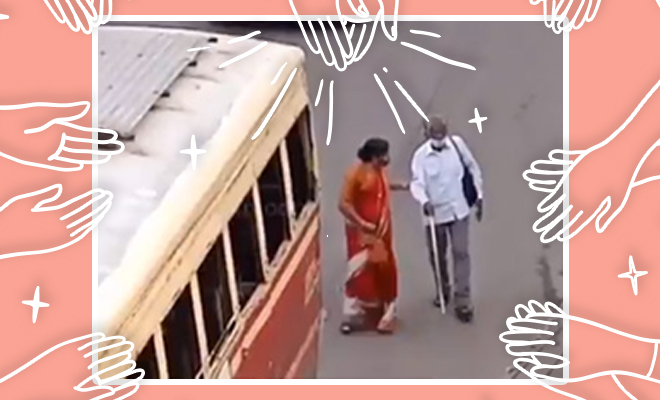 We live in a world that is obsessed with the call out culture. Where all it takes for people to publicly call anyone out on their wrongdoing is a fraction of a second, an average internet connection and possibly no personal tie to the situation. But when it comes to making use of this very call-out culture to publicly applaud a person for their precious and noble acts, we seem way less generous. Especially at this time of a pandemic, when we can’t have enough positive stories. Once in a while, it would be great to acknowledge the good that is still there in the world and it might just be the positivity we need.

As it did happen, when we heard about the Kerala woman who ran behind a bus in a saree, to stop it and ensure that a blind man gets a seat on it. Talk about humanity not being dead, this particular woman in Kerala who is called Supriya and works as a saleswoman in the town of Tiruvalla is now trending on the social media for all reasons good and sweet, after she selflessly sprinted behind the bus, so she could get a blind man on-board.

The visually impaired man was seen walking behind Supriya with a cane in hand, when she managed to stop the bus, and helped him all the way up to the bus, earning not just a thanks from his side, but praise from people all over the internet.

There is hope in humanity….its why the world still spins… https://t.co/HHYGeIQt2v

Also Read : Spread Positivity: Two Police Officers Helped A Homeless Woman Deliver A Baby On The Pavement. This Restores Our Faith In Humanity

She is one of her kind….. Good Instincts straight away, did not hesitate even one second….. World still exists due to souls like these…..

These kind of persons make the world beautiful. Let's protect them, care for them, support them and let's be like them. #spreadpositivevibes

The video that was captured and uploaded online, is now making rounds on twitter with netizens dropping love on it saying things like, “She made this world a better place to live. kindness is beautiful!.” No argument there, she really did. Another user wrote, “I see an angel come running, stopping the bus and taking him in,” and honestly, we think it’s heart-warming.

A simple gesture that people are now saying was enough to put a smile on their faces and remind them just how appreciative good deeds can be, is a true example of how kindness goes a long way. Especially in these times where all of us are a little wary of other humans.

Also Read : SpreadPositivity: A Police Team In Jodhpur Helped A Woman Give Birth. How Incredible Is This?