Sonam Kapoor Got Trolled For Talking About Article 370 And Her Connections With Pakistan. Wow, Anything Will Rile Us Up! 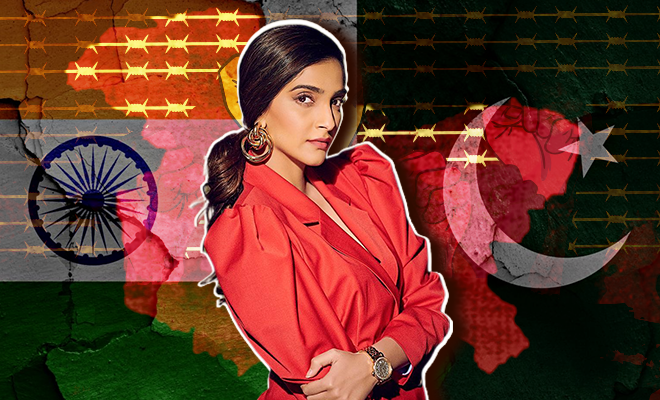 On August 5th, we witnessed a major event in history – Article 370 got scrapped in Jammu and Kashmir. Also, Union Home Minister Amit Shah announced the bifurcation of the state into two union territories, Jammu and Kashmir and Ladakh. This decision divided the country into two sections majorly, one that is pro this move and one that is against. Then there is this third group, which feels they aren’t equipped with knowledge surrounding this move and its implications. Which is precisely why, they feel they are not in the right state to give an opinion on it out loud. It’s a sensitive subject and blindly taking sides would just make things worse. However, when Sonam Kapoor did exactly that, she got trolled ruthlessly by netizens.

Sonam Kapoor spoke to the BBC Asian Network, the video clip of which was posted on their Twitter. On being asked about the nullification of the Article 370, Sonam said, “So for me now, I think it’s better to keep quiet and let this pass, because this too should pass… and I think our countries were one country 70 years ago, and the fact that there is so much divisive politics at play is really heartbreaking.”

The Kashmir situation on the Indian-administered side continues to divide people, including in Bollywood.

Actress Sonam Kapoor has been speaking to us about it and says it's upsetting because of her family's links to the region. pic.twitter.com/Uz5Leujiaz

She also opened up about her family’s connection with Pakistan, saying that it would be really nice if we could attain peace between the countries. “I am half-Sindhi and Half-Peshawari, so it’s heartbreaking to see that part of my culture is something that I can’t explore as well because of that [the conflict],” Sonam revealed. I don’t see anything wrong with what she said. In fact, it’s a smart thing to maintain silence if you’re unsure of your stance. And what’s wrong with having Pakistani connections? A lot of Indians, especially Sindhis and Punjabis come originally from Pakistan.

Hey dumbass @sonamakapoor could you tell us which national anthem do you listen to that has the line 'Hindu, Muslim, Sikh, Issai'?

And also elaborate on your family links with Pakistan. The common Indian who's made you what you are deserves to know. #SonamKapoor pic.twitter.com/H2H87QH4VU

Somehow, her statements irked the low IQ people on Twitter, who are basically goons sitting armed online. The thing is, no matter what her opinion would have been, she would definitely be pelted by these textual stones. It’s the trolls, that’s what they do. Shaming her on her connections with Pakistan, as well as her lack of stance on the issue, a user wrote: “She is leftist.. she always supported Pakistanis and Pakistani artists on the cost of Indian Artist and Actors.. Shame on her..” How loosely are these accusations thrown at people? How irresponsibly can you label someone a leftist?

Didn't understand a bit of what @sonamakapoor is trying to say.If U are not educated& have no knowledge on important issue of J&K,its better to keep quiet rather than making a mockery of one's self. It gives opportunities to our enemies to use ur fashionable comment #SonamKapoor pic.twitter.com/OtP0K0OwNs

In the interview, Sonam Kapoor also expressed her displeasure for Indian movies getting banned in Pakistan. When that happened, a lot of people said we don’t need Pakistanis to watch our movies, and acted like we don’t care. How difficult is it to accept that there are multiple perspectives?  She said, “As an artist, you want to be represented everywhere and you want your work to be shown everywhere. Neerja wasn’t shown in Pakistan even though it was a true story, because the plane (Pan Am Flight 73) landed in Karachi and the hijack took place in Karachi and it [Neerja, the biopic on the life of air hostess Neerja Bhanot] didn’t in anyway show Pakistan in a negative light at all. But the fact that they didn’t show the film there was really heartbreaking for me. I have a huge Pakistani following and my two best friends, they are Muslims and half-Pakistani.”

ALSO READ: A Pakistani Girl Yelled At Priyanka Chopra For Being Patriotic. PeeCee’s Response Was Powerful And Put Her In Her Place

When we lost Fawad Khan to the artist ban, most of us didn’t like it. But that happened, and now Pakistan lost Indian cinema. Whether you agree with it or not, shouldn’t we be tolerant of each other’s opinions? What is democracy otherwise? When PeeCee got verbally attacked lately by a Pakistani woman, who misunderstood her tweet, all of us stood by her. Cut to today, we are doing what that woman was doing – attacking a woman for her opinion. We fought the British, for our right to think, speak and live freely. We shouldn’t become the very monsters we fought.

National Award Winning ‘Mahanati’ Tells The Story Of A Legendary Actress Through Powerful Details In Her Sarees. We Love It(Opens in a new browser tab)

Vaani Kapoor Doesn’t Want To Look Sexy Because She Wants Her Talent To Shine. Why Can’t Both Go Together?(Opens in a new browser tab)