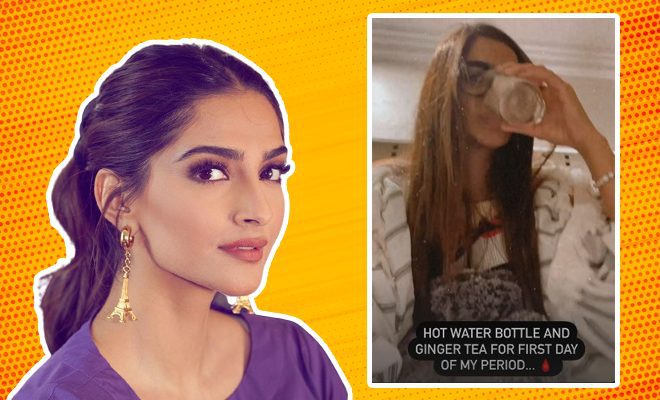 Sonam Kapoor Cheekily Shut Down Pregnancy Rumours And We Love It

When there is nothing much going on in Bollywood, people spend their time speculating. Especially when it comes to actresses. With a lot of actresses in Bollywood getting married or pregnant, this is the first thing that comes to mind while speculating about another actress. So when Sonam Kapoor Ahuja recently returned from London, the rumour mills went into an overdrive.  And the actress’s response to it was cheeky and so fun!

Recently, the actress Sonam Kapoor Ahuja returned to Mumbai, India after spending the Covid-19 lockdown with her husband Anand Ahuja in London. Upon her arrival, there were speculations made that she might be pregnant with her first child.

It was a video of Sonam Kapoor Ahuja going somewhere on Instagram that further added fuel to the fire. Many online users commented on that video stating that Sonam Kapoor Ahuja “looks pregnant” and others were sure that “she is pregnant.” Most of these people obviously have no connection to her, her husband and are definitely not doctors.

Least to say that the rumours of Sonam Kapoor Ahuja being pregnant didn’t last too long. On Monday, the Neerja actress took to her Instagram account and put a boomerang story of her drinking a hot drink. She wrote in her story, “Hot water bottle and ginger tea for first day of my period…”

The cheeky response to the pregnancy rumour, that was going around social media, was effective. The rumours and speculations around Sonam Kapoor Ahuja’s pregnancy seem to have died down.

What I honestly loved about her Instagram story post was the fact that the actress responded to the rumours without actually having to respond to them. It was a subtle, clear message and we think it’s smart.