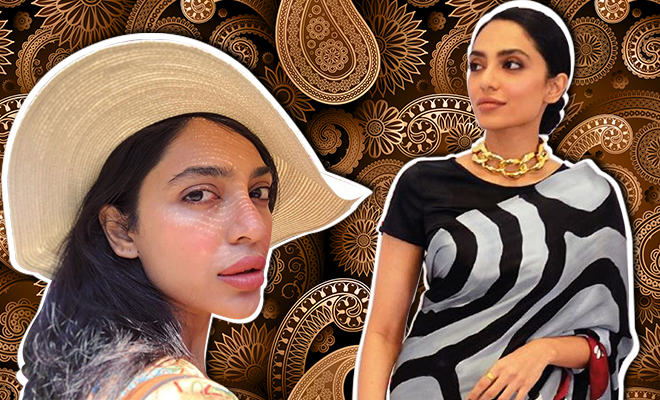 Sobhita Dhulipala Says Bard Of Blood Deals With Gender Dynamics And Fear. Sounds Like Our Cup Of Tea

From being crowned as one of the winners of Miss India 2013 to becoming a supermodel and now a promising actress, Sobhita Dhulipala has us impressed with her talent and beauty- and by beauty, we are mainly talking about those very full, very sexy lips. Sobhita Dhulipala won hearts with her role in Made In Heaven, where she was seen as a wedding planner, whose imperfections and layered character made us fall in love with her in the show. The gorgeous actress who made her debut in the Anurag Kashyap’s Raman Raghav 2.0 alongside Vicky Kaushal and Nawazuddin Siddiqui will now be seen in Bard of Blood, produced by Shah Rukh Khan. Speaking of Bard Of Blood, Sobhita in an interview said that the show deals with gender dynamics and fear.

Also Read: Made In Heaven’s Sobhita Dhulipala Is Now A L’Oréal Girl. Aishwarya Rai Bachchan Is Recommending Shampoos To Her

Sobhita Dhulipala plays an intelligence officer in Bard Of Blood, a seven-episode Netflix India original, based on Bilal Siddiqi’s best selling book of the same name. The series will showcase some”political undertones” and it also features Emraan Hashmi, Vineet Singh and Jaideep Ahlawat in pivotal roles.

Sobhita was seen walking the ramp at Lakme Fashion Week for Salita Nanda as a part of ‘The Platform’ programme. Talking about her show, Sobhita said,“This show explores gender dynamics and fear. All these subjects like agents and Taliban, we consume them in cinema, books or news. But we forget they have beating hearts, they sweat, they get scared, etc.”

“So when you come down to it, there are these three people who are so hard to be strong in the face of fear. It’s a very human story. It has political undertones. There’s a historical angle attached to it and the conflict, and I thought it was a very interesting script,” Sobhita added. In Bard Of Blood Sobhita Dhulipala will be seen doing some action for the first time and it made her realise how artists sometimes stop themselves from experimenting. The series will stream on September 27, 2019.

“I was surprised that not only was I pretty decent at doing action but also enjoyed it. It made me realise how as an actor you decide that ‘this is who I am, this is my definition,” said the immensely talented diva. Sobhita Dhulipala added and said, “And suddenly you are cast in a show like this and put in a different situation. You suddenly feel ‘I won’t belong here’ but I was thriving in this environment.”

When Sobhita was asked if there is a second season of Made In Heaven coming, she said that the makers have been keeping the scripts away from the cast but the good part is that the shoot will be starting soon! “The first season ended at the place where the show could witness many possibilities. I am curious to find out how Karan and Tara became so close, how she is so non-judgemental and what happens to them now? How risk taking are they going to be? I’m quite curious to find out,” she concluded.

We’re excited about Sobhita Dhulipala’s forthcoming series! What do you think?!