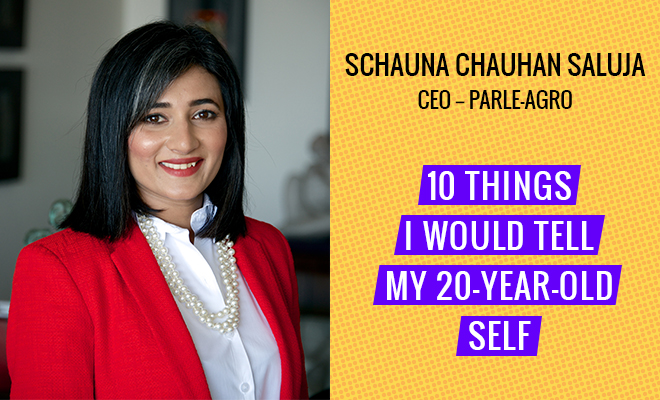 Schauna Chauhan Saluja: “The Most Valuable Asset Is TIME”

As the CEO of Parle-Agro — one of the largest food and beverage companies in India — Schauna Chauhan Saluja knows a thing or two about being a woman in a man’s world. However, she’s always maintained that her father was keen that all three of his daughters join the family business and someday take over the reins. So immediately after getting a Bachelor’s degree in business from the University of Lausanne, Schauna joined the family-operated firm in 1999. You’ll see shades of her brilliant business acumen in the fabulous marketing activations she’s spearheaded for brands like Frooti, Appy, Hippo Baked Munchie, and the packed drinking water Bailey, in the company’s kitty. And with a presence in over 50 countries today, her company is set to become one of the first Indian food and beverages firms to truly go global. Counted among the 30 Most Powerful Women In Indian Business and 25 Most Influential Women In India, Schauna’s mantra in life is not to get ahead of others, but to get ahead of herself and break her own records with courageous business decisions. Now here’s one woman who is definitely in the driver’s seat!

Trust me, a hangover is a TERRIBLE feeling. And the worst is when you don’t remember anything.

2. Time is a valuable asset

The most valuable asset in the world is TIME. Don’t waste it. Use every moment of it to better yourself. Remember it’s one asset you’re going to wish you had more of later on.

People you love also have faults and will let you down. And seriously, that’s ok. You should accept that. Everyone has some kind of flaws.

5. You can’t control everything

The world doesn’t end when your boyfriend dumps you. It’s a temporary phase, even though you think the pain is never going to go away. But I promise you it does. I’ve gone through it too and today, I laugh about it with my sisters.

The simplest and the easiest way to destroy any relationship is by listening to gossip.

Talk to your mother. She’s right most of the time. Learn from her experiences (she’s already experienced everything you’re going through in life right now) on love, friendships, health, family, sex. Listen to her. You won’t regret it.

8. Being popular isn’t really all it’s made out to be

Don’t be afraid to be the ‘Only One”. Believe in yourself. You don’t have to be like everyone else. Stand up for what you think is right.

10. Submit to the power of red

Wear red lipstick. It’s a colour I wish I had experimented with a long time ago and signifies power, strength, and confidence. It’s a shade ANYONE can wear.