Sara Ali Khan And Varun Dhawan’s Film, Coolie No. 1 Is Out With Its Poster And We’re Excited 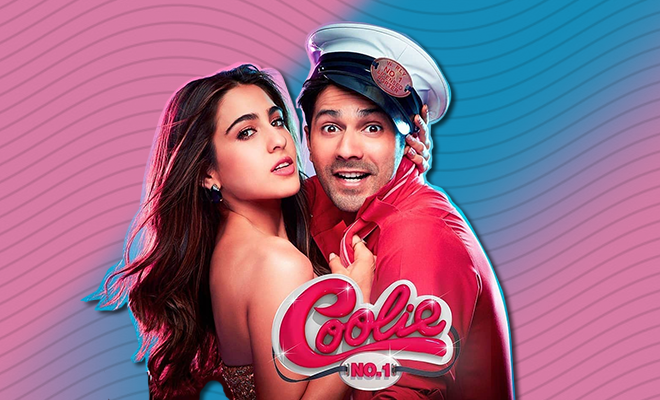 So it was a usual Monday, where I was scrolling through my Instagram looking for some funny memes like most of us and contemplating whether I should get the day started or just procrastinate for a while. And just when I decided that I might need the money to feed myself and was about to drag my bum out of the blanket, that my feed had the movie poster of Coolie No. 1 and this time without Govinda and Karisma Kapoor. Yup, this one has Sara Ali Khan and Varun Dhawan and they just rolled out the first poster.

Also read: Netizens Were Impressed With Sara Ali Khan For Carrying Her Own Luggage. We Get That It’s Humble, But Impressive? Nope!

Sara Ali Khan and Varun Dhawan shared the first motion poster of the forthcoming film on Sunday and in the follow up, two teaser character posters were unveiled. The final poster reveal of Coolie No 1 came out today, which also marks Sara’s 24th birthday. Coolie No 1 is helmed by David Dhawan and is slated to release on May 1, 2020. We must admit, Varun Dhawan looks more like he’s going to be remaking Dil Hai Ki Manta Nahi than this movie. But we will take it.

Check out the poster!

In the posters, we see Varun Dhawan dressed in a traditional railway porter’s costume and sports the iconic Coolie No 1 badge on his forearm. While Sara Ali Khan looks very glamorous on her part, as always. Sara is seen donning a body-hugging, shimmery, one piece as she clings onto Varun’s character in one of the posters. Sara will be essaying the character that is referred to as Pooja,  like Karisma Kapoor’s in the 1995 film. Varun, on the other hand, will be playing Raju aka Coolie No. 1.

Of course, the coolie has gotten quite the upgrade. Instead of lugging around clunky suitcases, he is now moving around branded luggage. So, yeah, it’s not the same old, same old.

According to the reports, Paresh Rawal will be stepping into the shoes of Kader Khan and will seen as Sara Ali Khan’s father in Coolie No 1. The first schedule of the film began in Bangkok this past week, with Varun’s mother giving the clapper for the mahurat shot! The film is produced by  Vashu Bhagnani, Jackky Bhagnani and Deepshikha Deshmukh. This will be David’ 45th film as a director. We’re looking forward to see the father-son duo on screen back.

Let us know your thoughts on the poster!