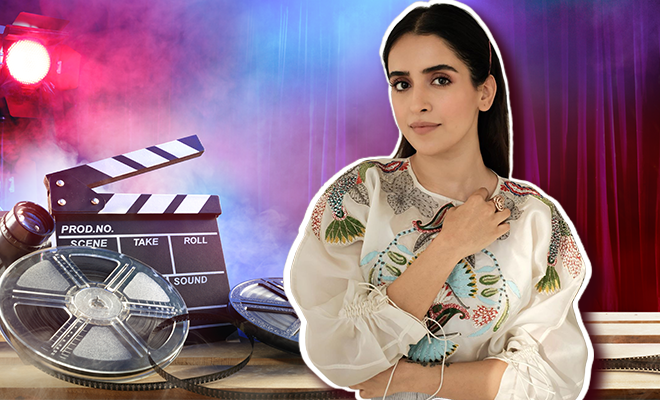 Sanya Malhotra Says A Good Film Has Talent, The Right Story And The Right Director. We Would Have To Agree!

There’s nothing conventional about Sanya Malhotra. She wears her curly hair, like that, curly. She chooses films that you’d think are a departure from the norm and she does it while lounging around in what she’s comfortable in. She has no time for your judgements and we love her for it. And then her film choices are anything but the norm. Being a part of offbeat films like, Pataka, Badhaai Ho or Dangal for that matter, actress Sanya Malhotra is changing the definition of what works in Bollywood. She has proved that her script choices may not be expected but she certainly knows what works. Both her films have earned National Awards and Sanya couldn’t be more grateful for it. Recently Badhai Ho had won the 2019 National Award National for Best Popular Film Providing Wholesome Entertainment and Sanya Malhotra believes that films with good stories are indeed gratifying.

Also read: Sanaya Malhotra Shared A Childhood Picture Of Herself And It Is All Kinds Of Adorable

Talking about the achievement of Badhaai Ho,  Sanya Malhotra said, “When I heard the story of Badhai Ho, I knew it would be a very special film because the subject was different. This was one of those films where I took no time to say ‘yes’. The amount of appreciation we have got from the audience and critics is unimaginable. That is why the National Award win is gratifying.” And it wasn’t like everyone knew this movie was going to work. It was when the word got around that the movie started to do well. A sleeper hit, if you will.

“In fact, we had the same feeling when we were making Dangal. When finally the film came out and people started showered love, the fact was satisfying for all of us that the story had inspired many girls,” said Sanya. The film also earned Sanya Malhotra’s co-star Zaira Wasim the National Award for Best Supporting Actress in 2017.

Sanya Malhotra has played an important role in Dangal and Badhaai Ho. If we were to put two and two together, we would say that Sanya is the lucky charm for National Award winning films. “I think I am lucky to be part of these films rather than my being the lucky factor,” she laughed and added “Everyone in Badhai Ho was a celebrated actor — be it Neena (Gupta) ji, Gajraj (Rao) ji, or Surekha (Sikri) ji,” said Sanya. The famous daadi played by Surekha Sikri won a National Award as Best Supporting Actress for her role in the film.

Also read: Sanya Malhotra Says She’s Okay To Step Out Without Makeup And We Are Listening!

“When good talent collaborates with the right story and director, a good film happens,” concluded the talented actress. Meanwhile, Sanya Malhotra will be seen in Anurag Basu’s next film also. A National Award winning one, perhaps?