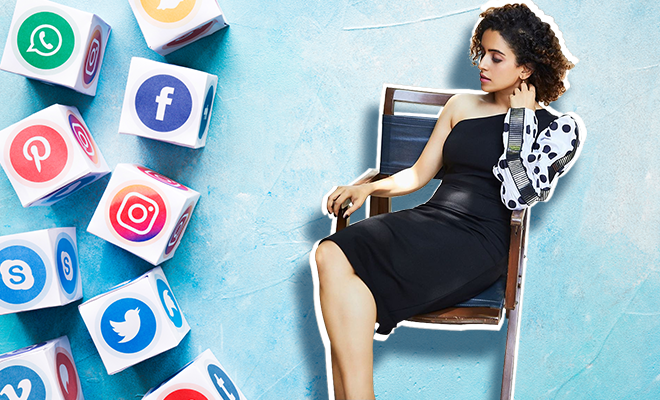 Sanya Malhotra Says She’s Okay To Step Out Without Makeup And We Are Listening!

The digital world and social media have taken over the conventional career choices and now most of us, well, including me are making a living through it! It’s crazy how social media literally taken over every aspect of our lives. It’s not only Bollywood celebrities who are now popular, bloggers and influencers are upping their game and their stakes are higher. The likes on a picture or views on a video really count for anyone, giving all of us the validation we seek at some level. It does look like a real ask,  you are constantly on your phone hoping more people are double tapping so you can feel better. Not so much for actress Sanya Malhotra, who is currently riding high on the success of Badhaai Ho. The actress has said that she doesn’t seek validation anymore and she does have a point. We could all learn from her.

Firstly talking about her choice of films, in an interview  Sanya said, “Things are changing as people are making more content-driven films, just like the films I have done. In Pataakha, I had to look completely different. Now even female actors are changing their looks, they don’t put themselves as the conventional actors, who are only looking pretty and dancing.”

ALSO READ: Bollywood Actresses Are Going The Extra Mile To Transform Into Their Characters. We Need To Support Them By Watching These Movies

When asked about the role of social media as a part of her profession, Sanya added,  “This is not only for an actress but for everyone. After posting a picture, they need validation from random people and they think that even if they get one like, they start feeling that they are extremely pretty. There are times when we are not wearing makeup and then people pass comments like “Oh she looks like this without makeup”. To be honest personally, this doesn’t affect me now.” Looks like Sanya has dodged this very potent bullet and found peace in being comfortable in her own skin! Which we have to applaud her for.

Sanya Malhotra isn’t your typical actress with model-esque long legs, and straight hair. She’s an anomaly, so it’s important when she says these things. She says, “This used to constantly worry me. But after a few months, I stopped and started feeling that ‘I can’t do this’. My happiness and my work come first. It is ok if I don’t look nice, it’s ok if I go without makeup and I am looking really bad and people are commenting about my looks. I really don’t mind because yes I look like this and it’s their wish if they want to see me or not. So I think that validation is a problem personally, I have stopped seeking it.”

Sanya Malhotra made her debut with a hit, Dangal and since then, has been choosing her roles carefully. The Badhai Ho actress last shared the screen with Nawazuddin in the critically acclaimed Photograph. Sanya Malhotra will now be next seen in Anurag Basu’s upcoming film.