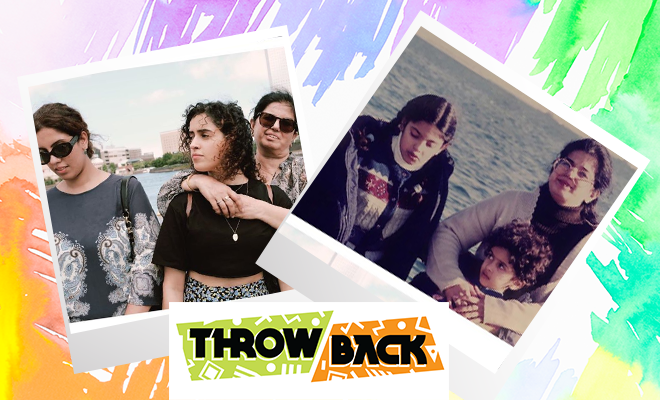 Sanya Malhotra is one of the most talented actress amongst the current generation of young actors and was last seen in the  Ritesh Batra’s Photograph opposite Nawazuddin Siddiqui. Before Sanya Malhotra kickstarts with the shoot of her next film, she chose to go on a vacay with her mother and sister to Tokyo, Japan. This trip is extremely special for Sanya Malhotra and her family as they paid a visit to the house they used to live in 23 years ago. And just like us, she indulged in a bit of nostalgia by recreating a picture from her childhood with her mother and sister.

The Dangal actress shared a before-and-after picture of herself with her mother and sister from the same place. We can’t stop gushing over how cute Sanya Malhotra looked as a child! Sharing a picture Sanya wrote,”Kal aur Aaj ❤️Recreating memories #japan ??.” Sanya and her family used to stay in Tokyo before shifting to Delhi, where she currently stays. The actress also visited the park she used to play at during her childhood!

A source close to the actress told DNA, “Sanya went down memory lane, looking at the house, the verandah and playground she grew up in, playing with her sister. One of the reasons why she and her family chose Japan for a vacay was to try and visit the house and relive the memories. They were glad to see that there weren’t many changes in the interiors or the verandah from their times.” Apart from being a supremely talented actress Sanya Malhotra is someone who is confident in her own skin and we could all learn from her. The actress doesn’t take the pressure to wear makeup, she is totally fine in getting papped looking de-glam.

Also read: Sanya Malhotra Says She’s Okay To Step Out Without Makeup And We Are Listening!

On the professional front,  Sanya Malhotra will next be seen in an untitled film directed by Anurag Basu. The film is reported to be a dark comedy, the Dangal actress will be seen sharing screen space with Aditya Roy Kapur. “When I have a script in hand, I go crazy reading it. I rehearse constantly. But Dada (Basu) does not believe in a script. For the first time in my life, I’m very relaxed. One does not know what Dada will ask us to do. It is like being on stage,” said Sanya when asked about what it was like to work with Anurag Basu.

Would You Wear A Saree To A Bar? Neena Gupta Did And We Love Her Devil-May-Care Attitude