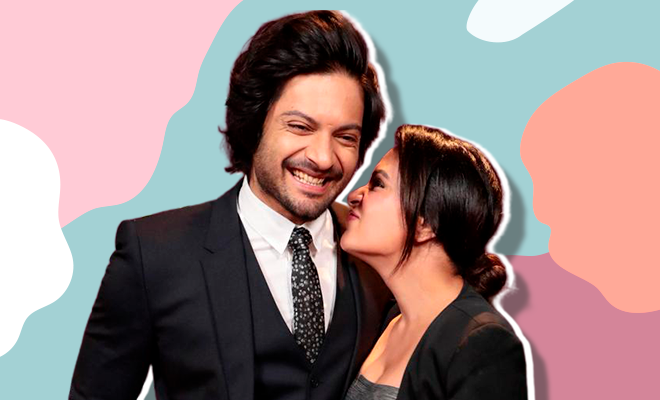 Richa Chadha And Ali Faizal’s Relationship is All Things Adorable. They Are Giving Us Major Couple Goals

I love a good love story. It’s true, I am a sucker for romance and the thought that everyone has one person out there to complete them. Yeah, I might be a little dramatic and idealistic but hey its better than seeing the glass half empty. Even when it comes to picking a movie or a book, my first choice will always be a heartwarming love story and I don’t care if that makes me a “girly girl”, because there is no such thing as that. But do you know what is better than a fictional rom-com? A real life love story and especially if it’s a celebrity romance. DeepVeer, Virushka, Saifeena and all the other celebrity couples out are seriously couple goals. *Cries in single*

Now, we have another celebrity couple whose story is nothing short of Bollywood movie (maybe without the mushy songs though). I am talking about Richa Chadha and Ali Faizal who have been dating since 2016. When Richa was asked to describe her love story she said it was “nothing short of a miracle” and we have to agree with her. The two Fukrey co-stars are absolutely adorable together.

Also Read: Richa Chadha Has Embraced Unusual Colours And It’s Made Such A Difference In Her Fashion Game

In a recent interview, Richa was asked about how she and Ali fell in love. She replied, “The thing is, it’s nothing short of a miracle. That two people who have similar backgrounds, two normal, regular people from middle-class upbringings got together. Two people with a similar value system got in this pool of showbiz. We found each other and we are happy with each other. I think that itself is a huge miracle. And when that happened, I think I couldn’t deny it that we were very…not just attracted to each other, but also understood each other on a fundamental level. It’s great you know.”

It isn’t that often that you get to hear of intercultural love stories like that. I mean, you must admit what she said, sounds like it was from a Nicholas Sparks movie. At the risk of sounding like a fangirl, they’re so cute together.

We are totally taking notes, you should be too!