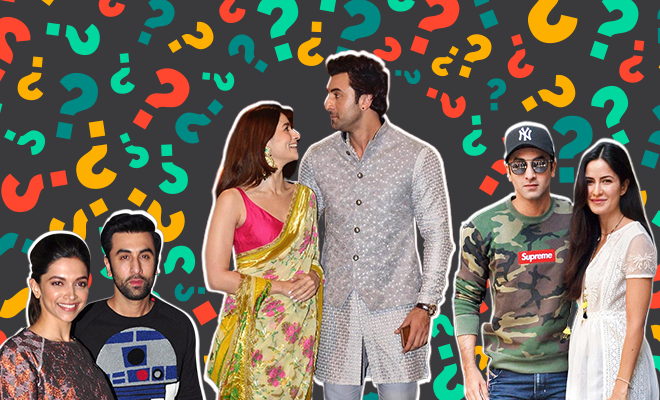 Ranbir Kapoor’s Girlfriends May Change But His Disinterested Expression Is Constant. Why Though?

When Alia Bhatt started dating Ranbir Kapoor, a lot of people didn’t like the fact that she hooked up with her good friend’s ex. That’s something I wouldn’t do and I would not appreciate it if a friend did that to me. Ex-boyfriends are off-limits! I was even turned off by the movie Cocktail. Maybe my understanding is limited, or the sis code is strong with me. But then they say love is blind and all that and this couple is in love and Ranbir seems more committed than he has ever been. Maybe, as per the sis code, it wasn’t the right thing to do. But everybody has the right to love who they want and if the feeling is mutual, then why not? Both of them were single at that point, so who are we to judge? Even Katrina doesn’t hold a grudge against them but they still receive hate for getting together.

So recently, when a picture of them at the Ambani’s Ganpati celebrations surfaced on Instagram, people left a lot of unwelcoming comments. A user wrote: “Everytime I see them together… I only get reminded of how Alia used to be such good friends with Katrina… and now dating her ex… I mean how can anyone on earth do this to a friend….I have always loved Alia..but now I can’t say… She has let me down seriously….” In fact, some users went on to call their relationship a façade for promoting their upcoming film, Brahmastra. “Fake relationship for FLOP brahmastra (sic),” a user wrote. It’s funny how Katrina is already over this and here we are holding a grudge that isn’t ours to hold in the first place. When will we get over this?

However, some users made a point that I agree with! “Ranbir never looks at Alia always appears disinterested (sic),” wrote a disappointed user. And I am glad a few people pointed it out because now I know it’s not just me who felt that way. He always has this poker face on, and will avoid eye contact with Alia in public – at most times. Alia Bhatt, on the other hand, is her usual cheerful self, looking at him lovingly. Honestly, it does give out a vibe that Ranbir lacks interest and Alia is the one who is pursuing him. Someone said Ranbir looks stuck with Alia, “Ranbir is behaving like ye kis k sath phasa dia re mujhe (sic).” And that’s exactly the thought that crossed my mind.

So it got me curious, and I researched further on Ranbir and his disinterested expressions, because it’s not like any of us are going to save all this time and use it productively elsewhere. Which is when I realise that he has been carrying the same look from one relationship to another. Ranbir, if you are reading this – that look is not what most women prefer on their boyfriends. But look at him in pictures with Katrina or Deepika and you always see him staring off into a distance or looking like he would rather be somewhere else than there. But then again, that’s just who he is (I say like I know him!) Whatever it is, I don’t believe that they deserve the hate comments.

In fact, according to a report by Mumbai Mirror, Ranbir had got really sentimental when he asked Alia’s hand in marriage from her dad Mahesh Bhatt. Isn’t that adorable? I like how he expressed his affection openly at Filmfare awards. That’s the side we’d like to see more. We know nothing about their relationship dynamic, how they are at home or on their dates. I really want to take Ranbir’s side here, but seriously though, what’s with that look?

On the work front, Ranbir and Alia will be next seen in their movie Brahmastra, which is directed by Ayan Mukerji. The movie is going to have three parts, out of which the first will be released in summer 2020.