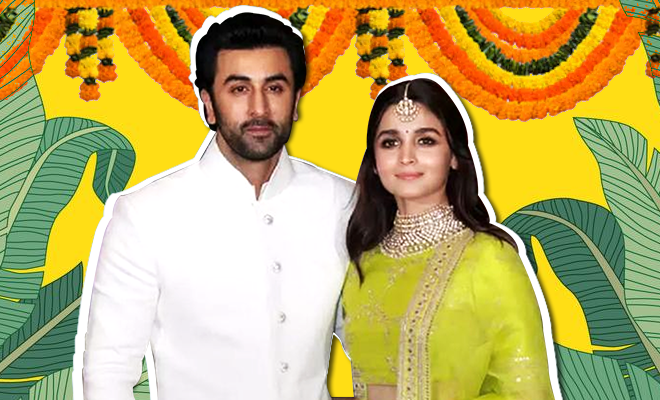 Ranbir Kapoor Got Emotional While Asking For Alia Bhatt’s Hand In Marriage. That’s So Sweet!

Bollywood has come a long way from what it used to be, with regards to relationships and friendships. Earlier, the entertainment magazines told stories about tinsel-town’s star-crossed lovers, friendships gone sour and the war of exes. Today, I see camaraderie, at every nook and corner. Deepika Padukone, Ranveer Singh, Ranbir Kapoor, Alia Bhatt, Katrina Kaif – all who could be awkward because of their romantic past, are friends! On the other hand, while we were so used to seeing breakups in Bollywood, it really warms my heart to see lovers getting married. Sonam-Anand, Deepika-Ranveer, Anushka-Virat and recently we heard of Sushmita and Rohman’s wedding plans! However, what really makes me happy and I bet would make us unanimously want to yell ‘I told you so!’ is the buzz that Ranbir Kapoor and Alia Bhatt are planning to tie the knot next year.

I’d like to pull a dadaji-from-Jab-We-Met here and say that it was so obvious that Alia and Ranbir had marriage at the back of their mind, for a while now. How else would you justify Alia spending so much time with his fam? From flying to NYC to meet his parents to spending time cooking together as a couple, Alia Bhatt’s efforts have been very evident. And honestly, that’s super cute of her. In fact, from all that Instagram banter, it looks like she is pretty loved by his family, especially future MIL Neetu Singh Kapoor. Now, of course, the couple look like they are at a very good space in their relationship. And according to a report by Mumbai Mirror, Ranbir has gone ahead and officially asked Alia’s dad Mahesh Bhatt for the permission to marry her. The report also said that Ranbir, who is known to hide his feelings in public (badly at this point because he looks pretty smitten), actually got really sentimental when he did that! Also, the good news is that Alia Bhatt’s parents have given the green signal!

Apparently, they are planning to get married in 2020. Alia Bhatt will be such a stunning bride! The sunshine that she is, Alia will have her entire entourage by her side and it will be such a spectacular wedding. It’s so cute when people finally meet “the one”, especially if you’ve seen their journey through their previous relationships and breakups. It just restores our faith in love and happy endings!

On the work front, Ranbir and Alia were shooting for their movie Brahmastra, which is directed by Ayan Mukerji. The movie is going to have three parts, out of which the first will be released in Summer 2020!

Arjun Kapoor Gets All Cheekily Possessive When Award Show Host Flirts With Malaika Arora. Aww(Opens in a new browser tab)