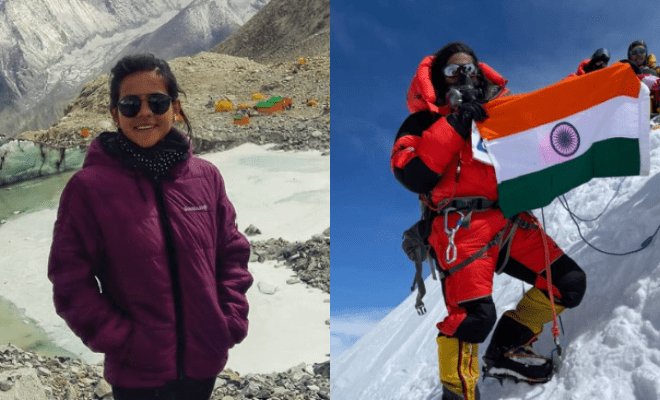 I feel immensely proud when I hear stories of women mountain climbers and them reaching new heights, quite literally! Like many other fields, mountain climbing is considered a very manly activity to indulge in but that is slowly, but definitely, changing, with women breaking new records every time. If this is not proof that women can do all those jobs and activities that men take pride in, I don’t know what is. So, I was very excited when I heard the news of Priyanka Mohite who became the first Indian woman to climb five peaks that were over 8000 meters after she scaled Mount Kanchenjunga, on May 5, 2022, at 4.52 PM.

Priyanka Mohite is 30-years-old and hails from Satara, Maharashtra, and is the recipient of the Tenzing Norgay Adventure Award 2020. She successfully finished scaling Mount Kanchenjunga, which stands 8,586 meters tall and is also the third-highest mountain on Earth. Her brother Akash Mohite has confirmed the news.

Mohite also climbed Mount Annapurna which stands 8,091 meters tall in April 2021 and the icing on the cake is that she became the first Indian woman to achieve this highly-amazing feat. Apart from these mountains, Priyanka has also scaled Mount Everest which is 8,849 m tall in 2013, Mount Lhotse which is 8,516 m tall in 2018, Mount Makalu which is 8,485 m tall, and Mount Kilimanjaro which is 5,895 m tall in 2016.

As everyone develops their passions as they grow up, Priyanka was passionate about mountaineering ever since she was a child. She started with scaling the Sahyadri ranges in Maharashtra. She has also scaled the mountain massif of Bandarpunch which is located in the Garhwal division of the Himalayas. Priyanka has also climbed Mount Menthosa which is 6,443 metres tall and is located in the Spiti district of Himachal Pradesh.