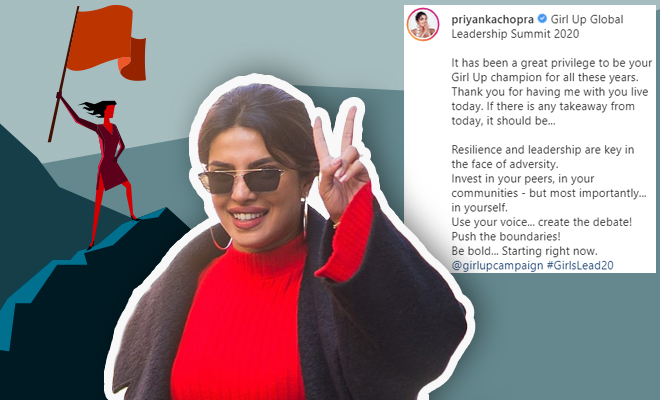 Priyanka Chopra Takes A Stand For Girls, Says Opportunity Is Not Fairly Distributed. We Agree!

For as long as I remember, I have been speaking up about women’s rights and advocating a world that supports and empowers women. Call it a part of my belief system or something that has been encouraged due to my profession, but whenever a topic concerning women and their position in the society is touched upon, I have the urge to vociferously protest any false notions of equality. And while that over-enthusiastic attitude may have branded me a ‘feminist’ among my friend circles, it is heartening to know that there are still a lot of women out there who stand alongside me, doing just the same, no matter what title they’re given.

Priyanka Chopra, is one such actress and icon who has always sought to take a stand for women and girls around the world. While attending a Leadership summit, the actress found herself in the middle of a debate around gender equality and she did not miss the opportunity to cement and loudly declare that she firmly believes in women empowerment. Despite the summit being a private affair, she made it a point to not let her thoughts stay limited to the summit and put them up on social media to draw everyone’s attention.

Talking about ‘opportunity not fairly distributed,’ she said, “Remember that even breathing is a privilege, too… because people around the world are persecuted for no other reason than the colour of their skin, their sexual orientation or their religious beliefs.”

Connecting her point to the present situation of the pandemic, she said, “To recognise that even social distancing is a privilege… because people living in extreme poverty and refugee sheltering in makeshift tents don’t have the luxury of staying six feel apart.” And she was correct. She urged people to recognise that we didn’t millions of people as followers on social media to drive change, and that if we’re even able to convince ourselves, then we are contributing to the problem.

She made some very valid, strong and impactful points that are sure to stay long with us even after the moment is passed. Talking about how no age is too young to start, we loved how once again Priyanka Chopra made it clear that no matter what, her loyalty will always lie towards making the world a kinder, more proportionate and equal world for everyone.

Also Read : Priyanka Chopra Says Getting Into Hollywood Required Her To Swallow Her Pride And There Was No Precedent For Someone Like Her