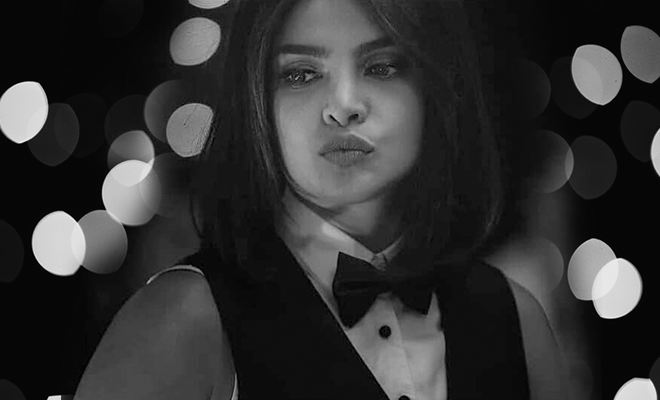 Priyanka Chopra’s Look From The Sky Is Pink Just Got Leaked, And We Think She Looks Incredible!

There is no actress in the tinsel town like Priyanka Chopra who can make literally any project she takes up work like a charm! She’s also dared to do what no one else has; that is carve a niche for herself in Hollywood, and we are nothing but extremely proud of her. Since her marriage to Nick Jonas, however, Priyanka Chopra hadn’t appear in a Bollywood film. She was about to play the role of Kumud in the Salman Khan starrer Bharat, but that never happened. Now PeeCee is all set to return in the Shonali Bhose directorial, The Sky is Pink. The Dostana actress will be playing the role of Aisha Chaudhary, a motivational speaker who is diagnosed with pulmonary fibrosis.

Priyanka Chopra’s look from The Sky is Pink got leaked on social media and her fans lost their cool over it. In the picture, Priyanka is seen donning a semi-formal outfit in a black and white picture, flaunting her bob cut hair. The OG desi girl looks incredibly gorgeous and is seen pouting in the picture. The picture went viral and her fans are claiming it to be the look for her next Bollywood flick. We can’t wait to see her stellar performance in a Bollywood film again!

Here’s the look from The Sky is Pink!

The Sky is Pink also features Farhan Akhtar and Zaira Wasim in the lead roles and is slated to release on October 11, 2019. Recently, the wrap up party of The Sky is Pink was also held, which was attended by the star cast of the movie including Priyanka Chopra.