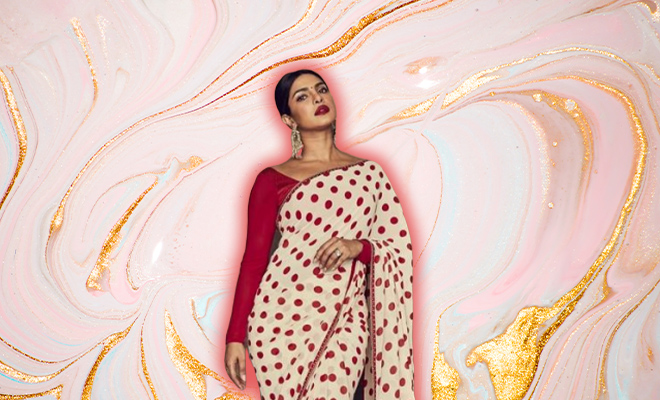 Priyanka Chopra Stubs Out The Controversy About Her Promoting War. We Have So Much Respect For Her

Priyanka Chopra is such a force to reckon with. Along with having a successful acting career in both Bollywood and Hollywood, she is also a producer, singer and a UNICEF Goodwill Ambassador. That woman must do more work in a month than I do in a whole year. But we love her because no matter what happens, she always seems to stand her ground and speak her mind.

The thing is, when you are in the limelight, you are bound to attract some controversy. No matter how good your work is, or how much goodwill you have, or how much you try and resolve conflict, there will always be someone trying to twist and turn your words to suit their narrative. Such a large platform doesn’t come without these strings attached. And that is exactly what happened between Priyanka and Ayesha, a Pakistani Girl who accused PeeCee of encouraging war between the two nations.

Before I get into why we are dredging this subject up again, allow me to refresh your memory a little. Last year, at an event in LA, Ayesha who was in the audience attacked Priyanka about a tweet she had posted congratulating the Armed Forces of India. Ayesha yelled out, “You are United Nations Goodwill ambassador for peace, and you are encouraging nuclear war in Pakistan. There is no way you are in this …As a Pakistani, millions of people, like, me, have supported you in your business.” Not only was this attack uncalled for and the claim highly exaggerated, but it is also highly disrespectful to talk to anyone in such a manner.

Also Read: A Pakistani Girl Yelled At Priyanka Chopra For Being Patriotic. PeeCee’s Response Was Powerful And Put Her In Her Place

Of course, Priyanka she wasn’t just going to sit there and take it. She had a very fitting yet suitable way of shutting Ayesha down. She said “Are you done venting? Okay. War is not something I’m really fond of but I am patriotic, so I’m sorry if I hurt sentiments to people who do love me and have loved me. But I think that all of us have a sort of, middle ground that we all have to walk. Just like you probably do as well. The way that you came at me right now… girl, don’t yell. We’re all here for love.”

Coming back to the present, in a recent interview, PeeCee was asked about that particular controversy. She said that she has never been or never will be pro-war and that her work is a testament to that. Just because she is a UNICEF Goodwill Ambassador doesn’t mean she can’t congratulate her own armed forces on an achievement. We agree with Priyanka here. No one stops being their own person just because they are an ambassador for a cause.

Following this incident, a lot of people felt that it was necessary for Priyanka to resign from UNICEF. The Pakistan Minister for Human Rights urged she be removed as the Goodwill Ambassador because of her tweet and this incident. Obviously, that did not happen. In fact, she just won the Danny Kaye Humanitarian Award for all the amazing philanthropic work she has done in her 13-years with UNICEF.

Also Read: Priyanka Chopra Jonas’s Passionate Acceptance Speech At The UNICEF Snowflake Ball Is A Lesson On How To Impact Change While Staying Gracious

In this interview, she also addressed those views. She said “Being an ambassador is a couple of things that I don’t think people understand. What do celebrities do? What is their real job when it comes to philanthropy? We are a means to an end. We are not an end. We are not something that can change too much, but we go to places of crisis, we take time from our lives, and we volunteer that time so we can bring attention to places of crisis and have all you guys write about it, and as soon as you guys write about it because we have gone there, we are highlighting the voices of those children that didn’t probably get the opportunity to have their voices magnified as much as they do when I tell their story. So that is the job of an ambassador: to use your position to magnify the voices of people that might not have it. That doesn’t mean we shouldn’t have opinions, because we are human. Also, we are not in politics, so we are not political. But at the same time, it’s very important to stand for peace and to stand for integrity and to stand for humanity.”

We need people like her who bring serious and very real issues of the world out in the open and lend a voice to those who are suffering in silence. She is really doing some remarkable work and we have so much respect for her.

More power to you, Priyanka!