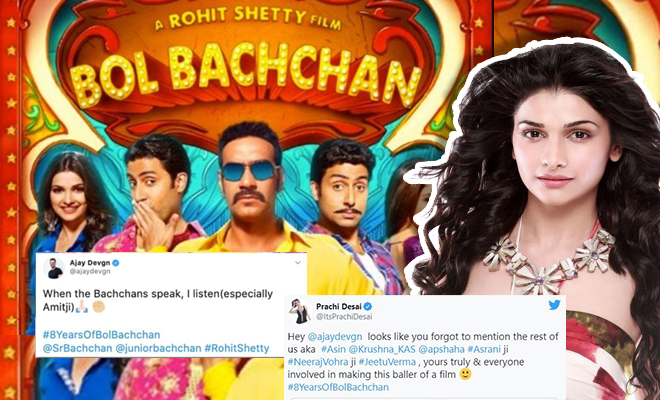 Prachi Desai Reminded Ajay Devgn To Tag The Rest Of Cast After He Only Tagged The Bachchans In His Movie Celebration Post. Why Ignore The Lead Actress?

Despite the raging nepotism debate, Bollywood still refuses to learn from its mistakes. Not just the directors, the biggest stars in the industry also make the outsiders feel sidelined and unimportant. Their work isn’t appreciated enough, they are denied opportunities and are often snubbed from the press junkets and promotional events too. All of this just because they are not from the ‘film background’.

Why am I saying this is because yesterday we saw first-hand how these brilliant actors are royally ignored by their own colleagues. On Monday, Ajay Devgn posted a photo on twitter to celebrate 8 years of Bol Bachchan and only tagged Abhishek Bachchan, Amitabh Bachchan and the director of the film, Rohit Shetty. The photo tweet had some BTS shots from the sets of the film and the caption said, “When the Bachchans speak, I listen (especially Amitji) #8YearsOfBolBachchan @SrBachchan @juniorbachchan #RohitShetty.”

Prachi reminded him soon enough that there were other people involved too who made this film a success including Asin, Krushna Abhishek, Archana Puran Singh, Asrani, Neeraj Vohra and Jeetu Verma and of course herself. She tweeted, “Hey @ajaydevgn looks like you forgot to mention the rest of us aka #Asin @Krushna_KAS @apshaha #Asrani ji #NeerajVohra ji #JeetuVerma , yours truly & everyone involved in making this baller of a film #8YearsOfBolBachchan.”

Also Read: Rohit Shetty Apparently Told Katrina Kaif No One Would Notice Her In A Scene In Sooryavanshi. That’s Because You’re Using Her As A Prop

Hey @ajaydevgn looks like you forgot to mention the rest of us aka #Asin @Krushna_KAS @apshaha #Asrani ji #NeerajVohra ji #JeetuVerma , yours truly & everyone involved in making this baller of a film 🙂 #8YearsOfBolBachchan https://t.co/8PpnjnFNad

Prachi isn’t someone who tells people off quite often but seems like the ongoing debate on favouritism and nepotism stirred her up enough to lash out against the favouritism in Bollywood. Clearly, Ajay Devgn has some apologising to do and credit all the cast members to for their work in the film. While he hasn’t reacted to Prachi’s tweet yet, Twitterati soon responded with support to the actress and lauded her for her reply.

A twitter user wrote, “Perfect reply. I pity the mindset of those people who are accusing her for attention. She was an actress in the film. The least she can expect is some credibility. No point of trending #SushanthSinghRajput when you can’t respect the other struggler.” Another tweeted, “Atleast she has guts to speak against wrong Proud of Prachi ❤ Way to go.” Someone wrote, “Mentioned the person having a guest appearance in the film But cant mention the lead actress of the movie?”

Did he really think he could get away with it? It’s high time these stars start appreciating their counterparts for their talent regardless of whether they come from film background or not. The outsiders of the film fraternity anyway don’t have it easy and have to make a mark on their own to thrive in the showbiz. It won’t hurt these big actors to give them the credit they deserve. Kudos to Prachi for calling out the sheer ignorance and disrespect to the rest of the cast of the film!

Also Read: Sushant Singh Rajput’s Death Has Pulled The Mask Off Of An Industry That Lives For Appearances. And The Stars Are Being Called Out