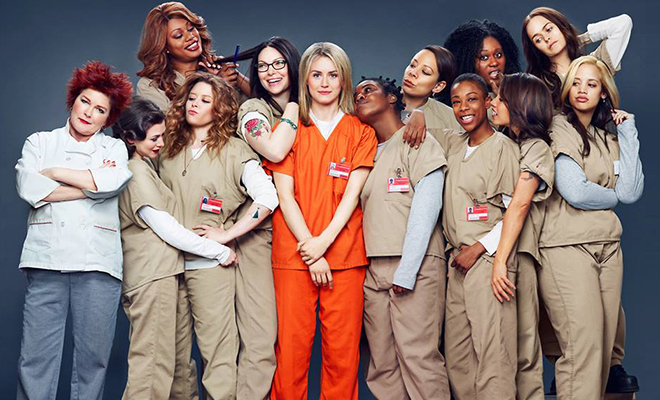 Reviewed: Should You Binge-Watch Orange Is The New Black This Weekend?

Netflix shows are a blessing and a curse. Mainly because all the episodes come out in one day — yayy, right? I mean, you don’t need to wait in angst after a cliffhanger episode. This also means that you can binge-watch the entire season within a day and then, in the very same angst, wait for it for another year…just like I did!

So last Saturday, I woke up early, finished some work, heated some popcorn, and began my binge-watching journey that was season 5 of Orange Is The New Black. I was about 4 episodes into the season and, I hate to say it, but I was utterly bored. Thirteen episodes later, the regret of the unnecessary waste of time set in.

Before you guys go on to think that I am here to bash this show, let me put it out there that I am a fan and an avid follower of the prison-centric series, but this season failed to meet up to the hype and the level the previous ones set.

Want to know why season 5 of Orange Is The New Black left me disappointed? Scroll down to find out.

From the very start of the series, OITNB has always kept its audience pleased in every department, from humour to drama, to even a whole lot of sex and nudity. I loved the fact that through the series, you learn that these women weren’t bad women, but were women who made bad choices — the flashbacks being the most integral parts of their stories.

This time it was more about the now rather than the past, which was good for a while — until the constant story line started getting to me. I think the writers were trying to break away from the regular structure of the show, but paired with everything else that went wrong this season, it just didn’t sit right with me.

The flashbacks that were brought up did shine light on a lot of things i.e., I did learn more about certain characters, but not as much as I would have liked to (let me reiterate, I WAITED A YEAR FOR THIS).

The show left off last season with a riot breaking out at Litchfield Penitentiary after the accidental death of inmate Poussey, all thanks to a careless prison guard. This season started off strong and empowering, only to play out to be rather childish and gruesome.

We get that these women were fighting for their basic rights, but as the story progressed (at a snail’s speed, of course), they started to back off. We saw Ruiz and Mendoza turn on their word, and Diaz surrender herself, and suddenly, familiar yet new faces started to take charge of the riot.

Like the pieces of a puzzle, each episode used to seamlessly fit into each other, but with this season somehow, the pieces were rather scattered, only to finally lead to a sort of big finale in the final 3 episodes (the buildup wasn’t great at all TBH).

A Plot Within A Plot

In this season, the main point of the plot was the riot and bringing Poussey’s killer to justice. Within that there was Red, hopelessly trying to get revenge on Piscatella. Don’t even get me started on that!

Her anger was justified, no doubt, but her manic behaviour while shit was literally going down in the prison was honestly, quite pointless.

And of course, the random Friday The 13th/Jason-esque encounter with Piscatella towards the end of the season seemed rather too much, especially since there was so much was going on already.

Usually the comedic scenes in the series used to be witty, free-flowing, and sarcastic, but this season, they felt like a force fit. Like they were trying too hard to bring that OITNB comic timing back.

I am aware that the humour on the show has been, most of the times, really crass, but this was just super immature and grotesque. The torture of the guards started off as a strong statement, but eventually turned into a weird and gross joke.

Since I was a little disappointed with the episodes I binge-watched, I do want to put it out there that the finale pleasantly surprised me.

I would, however, have been happier if something came out of the riot that took up 13 episodes of the show — in the end, there was no justice for Poussey, all the women got were Cheetos and Takis in place of respect, and they all ended up with an unknown future.

A failed negotiation resulted in all the women getting penalised and even separated from each other, which was definitely heartbreaking — leaving you with the question, what’s going to happen to them?

OITNB has always been somewhat of a dark cloud of practicality (besides the smuggling saga), and since it is loosely based on the author’s own experiences, I guess the reality of the situation was definitely brought forth this season.

Plus, I really enjoyed the part where the original 10 stuck by each other and held down the fort together in the finale — it brought that ‘one for all, and all for one’ factor we rarely got to see!

And let me just say that the strongest character of the lot for this season has got to be Taystee. She’s one inmate who was annoying, but at the end, you truly felt her pain when she broke down. Oh yeah, and Crazy Eyes Suzzane as well!

I wish we had seen a lot more of Sophia Burset though. Missed her sass throughout the season!

Overall, this season is a disappointment and didn’t match up to the previous ones. However, it did bring to light a new side of the show that may bring an element of surprise in the seasons to come.

Alas! We’ll only know next year…till then, let’s reminisce and watch reruns?