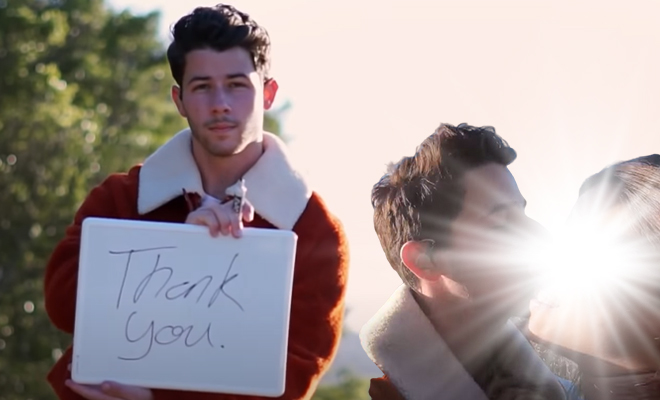 Nick Jonas’ Latest Song Is Dedicated To The Coronavirus Frontline Warriors And We Are Loving It. Watch Till The End For An Adorable Surprise

This coronavirus pandemic will go down in history as one of the worst medical crises in the world. With millions of people suffering and thousands who have lost their lives, COVID 19 is going to haunt people’s nightmares for months after it’s gone, if it ever does. But the thing is, as terrifying as it is for us can you even imagine what it must feel like actually being on the frontlines? Everything we know, we know because we have heard all the stories. The doctors and nurses have seen the bloodshed and it’s only because of them that the world has a chance of coming out of this, bruised and battered but we still stand a chance.

A lot of people have appreciated the work these frontline warriors are doing as they should. From our military to the Janta Curfew clapping session, it’s essential that our doctors and nurses feel appreciated. A lot of celebrities from around the world have also shown respect towards them but no one has done it quite as Nick Jonas has.

Nick, who is one of the coaches on the American singing reality show The Voice launched his new song Until We Meet Again at the finale. He dedicated this song to all the people working on the frontlines against coronavirus. How awesome is that?

Also Read: Aaradhya Bachchan Drew A Sketch To Extend Gratitude To The Frontline Warriors. We Could All Learn To Be More Grateful

He took to Instagram to announce the song and in the post, he also mentioned that a portion of the earnings from this song will go to a nonprofit organisation called Feeding America. The post read, “Wrote a new song called #UntilWeMeetAgain to perform on tonight’s #TheVoiceFinale and it’s out now! A portion of the proceeds will be donated to feeding America. Thank you all for an amazing first season on @nbcthevoice!”

The video of the song that seems to have been shot by Nick’s wife Priyanka Chopra just outside their Los Angeles mansion (I couldn’t believe it myself) features mostly Nick enjoying himself in what looks like a meadow but is not. In the video, he holds up whiteboards conveying messages of gratitude with pictures of doctors, nurses, people working at pharmacies and everyone else who are risking their lives to save the lives of others.

Isn’t that an amazing way to appreciate the people fighting this war for us?

The song itself has been written by him and is quite lovely and very catchy. After the part with the whiteboard, the highlight of this video would have to be at the end of the video, Priyanka makes a small cameo and is Nick showers her with a ton of kisses. It’s just such an adorable moment!

At the moment the couple is isolating in their Los Angeles home. But that hasn’t stopped them from doing their part in this war against COVID 19. They have contributed to several relief funds and NGO’s including, the PM Cares fund, Unicef, Give India and Goonj.

They were also part of the live-streamed benefit concerts- I for India and One World: Together At Home, that raised money to fight the pandemic.

Do watch the video, the song is like an earworm.

A Lot Of Celebrities Clapped At 5pm On 22nd March To Show Their Support. It Was Heartening