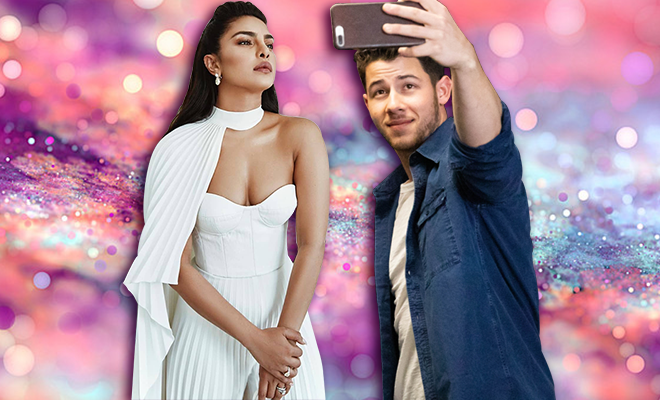 We’ll go out on our limb and say it, all of us have been guilty of forcing our bae into becoming our personal photographer! They don’t do it willingly, but hey, it’s a part and parcel of dating me. Whether you’re going out on a vacay or just a date, you know there’ll be tons of photo ops, and you wouldn’t want to miss out on any! Except that my boyfriend will probably end up taking blurry or unflattering shots of me. Priyanka Chopra and Nick Jonas are just like any of us. About taking pictures, that is. Except that Nick is a doting boyfriend and actually takes nice pictures of Priyanka Chopra.  The power couple are enjoying their Tuscany holiday, and their pictures look stunning.

Their vacation looks so romantic, it’s like a movie is being played. Recently, PeeCee shared a picture of her lounging in the pool, with the caption, “Best use of a vacation. The hubby taking pictures. Lol”. We believe it’s safe to say that Priyanka is living our dream life. It’s not like we are very far from it; we just need a vacation, a Nick Jonas, and lastly, to not look like a wet Penguin when clicked in the pool! Not difficult at all.

Before the pool pictures, Nick had shared an adorable video of them dancing away during sunset, under the pink sky. This is so beautiful and romantic, it’s impossible to not want to say yes to the first person who asks you out. Okay, that’s not advisable. But if you have a boyfriend, this will definitely make you want to take a vacation with him. Plus, you’ll get Instagram content for like weeks (sorry bae!)

ALSO READ: Zaira Wasim Gets Criticised Because People Think She Doesn’t Realise How Lucky She Is. But She Doesn’t Owe Bollywood Anything!

In fact, Priyanka Chopra and Nick Jonas also tried their hand at whipping up some Italian dishes. Nick Jonas shared a few fun videos on Instagram of them cooking, and captioned the post, “Date night cooking extravaganza.” In the first video, we can see PeeCee making some red pasta sauce, while in the second video one, we can see Nick arranging spaghetti like a professional chef! This looks so much fun, especially because we know Priyanka doesn’t know how to cook. She had confessed in an interview with film critic Anupama Chopra that she has never tried her hand at cooking. However, in the video she credits the chef for teaching her how to cook, and honestly, the prep looks amazing!

ALSO READ: Priyanka Chopra Says There’s A Huge Difference Between A Husband And A Boyfriend And We Agree!

On work front, Priyanka Chopra will be next seen in ‘The Sky Is Pink’ co-starring Farhan Akhtar and Zaira Wasim.