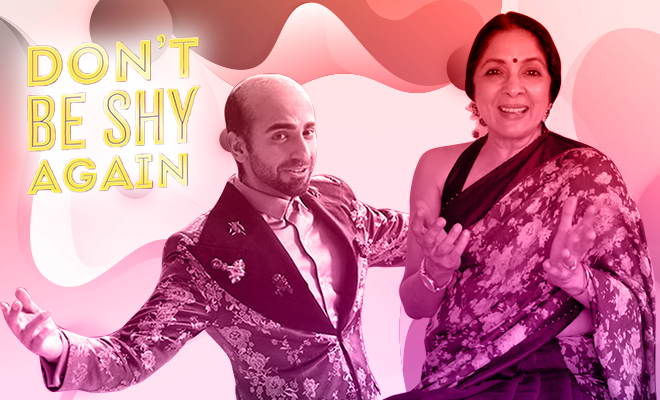 Social media wields a lot of influence, but you know that. But do you know who is making the most of it? All of Bollywood, that is who. Social media has allowed us to be closer to the celebrities we adore and keep up with them. Even the celebrities seem to be making optimum use of Instagram and Twitter. They are using it to address important issues, share pictures from their luxury travels and giving us major fitness goals with their fitness videos. I’m sure you have seen it all! But now, our beloved celebrities are also using social media as a tool to promote their upcoming movies and in really fun quirky ways too.

It began with Sonam Kapoor challenging everyone to dance to Prem Ratan Dhan Paayo and since then, from challenges to pictures, this has become a norm to promote an upcoming movie. Now seems like Ayushmann Khurana has followed suit. Earlier this week, he posted a video of him dancing to Don’t Be Shy Again from his upcoming movie, Bala. He issued the #DontBeShyAgain challenge, which has been having a great run on Instagram.

Also Read: Neena Gupta Talked About Ageism In Bollywood And She’s So Right. We’ve No Idea What Rangoli Is Talking About Though

Amongst all those who took the challenge were Aparshakti Khuranna, Varun Dhawan, Arjun Kapoor and Varun Sharma. As much fun as those were to watch, there was one video amongst all those that made us awe out loud. Yep, it was Neena Gupta and Gajraj Rao’s shaking a leg on Don’t be shy Again! If you haven’t watched it, you must immediately because it is sure to make your day.

In the video, Neena Gupta and Gajraj Rao can be seen grooving really cutely to the song, before they end up laughing. Neena is rocking the denim on denim street style. Can’t say we are surprised though she is the definition of a cool mom! Once she shared the video, her daughter Masaba Gupta commented saying, “I don’t think I can handle this anymore,” LOL. It is so adorable, we can’t handle it either!

Neena Gupta and Gajraj Rao played the role of Ayushmann Khurana’s parents in the movie, Badhaai Ho. Now they are all set to join hands again for the sequel, Subh Mangal Zyaada Savdhan.

Neena Gupta Wore Golden Sneakers To A Red Carpet Event. Is She Cool Or What?