Neena Gupta Dropped Some Hilarious Truth Bombs About Women Burping And Farting And It Being Considered ‘Unladylike.’ And We Love It 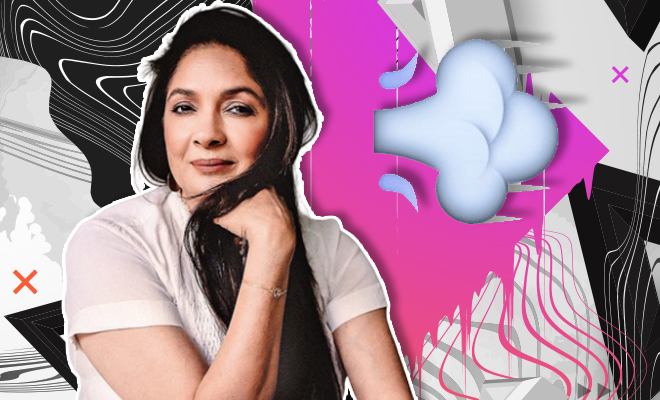 Out of all the things that are told to us women while we’re growing up, and there are a lot, from the kinds of clothes we should wear, the skills we need to pick up, the way we need to speak or even the hours during which we’re allowed to step outside our homes. We are told to sit properly, to dress properly and one of the most ridiculous expectation out of us has been where we are told that farting or burping in public is very unfeminine. Because just like everything else, that too is a man’s right to do in public, while we can enjoy letting out in private, so no one actually sees us for what we are – human. A sentiment that was reminded to us by the veteran and famous actress, Neena Gupta, as she talked about how women need to free themselves of this stupidity.

Masaba Gupta, the designer and daughter of actress Neena Gupta recently on account of Mother’s Day, posted a video of her mother where Neena Gupta can be seen talking about how women are expected to be more ‘ladylike’ in the eyes of the society by having to control when they can fart and burp. Breaking the irrational stereotypes built around the concept of doing or not doing a few things a certain way, we absolutely loved how the actress, known for her candid and honest nature, didn’t take a second before talking about it so freely.

Captioned “No Filter at the Guptas! Ever! Thank god ! Speak your mind friends,” Neena Gupta is captured asking the ever important question, “Why can’t women fart? Why can’t they burp?  Why can’t they sit however they want to sit?” and we do find ourselves asking the same questions as her. After all this while, when women have finally begun to claim their position in the society, there is absolutely nothing that should hold them back, especially not a natural process like farting or burping. And it is about time we realise, that things like these which have been made such a big deal about, are in fact, normal.

Also Read : Neena Gupta Suggests Making Most Of Your Husbands In This Time Of Coronavirus Quarantine And We Think She Has A Point!

This is not Neena Gupta’s first rodeo in terms of speaking her mind, considering she has time again posted numerous videos of herself, simply talking about topics that may be considered taboo. Be it talking about falling in love with a married guy from personal experience, and advising others to never make that mistake again, or be it about sharing her two cents about how Bollywood might be ageist in giving out prime roles, we know that till the time it’s coming from her, it’s going to be raw, unfiltered and honest.

Meanwhile, Masaba Gupta also ended up sharing another post for her mother, a picture of Masaba as a little girl, with Neena Gupta looking young and as gorgeous as ever. The caption, yet again captured the real essence of Neena Gupta and her jovial nature, as it read, “Happy Mother’s Day @neena_gupta – even though you said ‘haan bada boring hai yeh Mother’s Day’ , when I called to wish you.” Guess being bold and upfront is second nature to her, and we love it!

Also Read : Neena Gupta Is A Domestic Goddess In These Times Of Coronavirus. She Is Truly Nailing This Period Of Self-Isolation