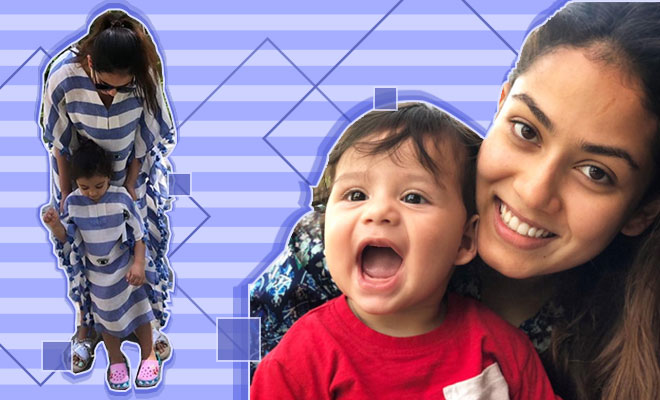 Motherhood isn’t easy – the poopy diapers, the tantrums and the sick days! And being a celebrity mom doesn’t make it easier. But there are perks to mommyhood, and Mira Rajput Kapoor seems to capture those perfectly. She’s just like every other mom, and a recent photo from her family vacay proves just that.

We caught the mommy of two twinning with daughter Misha in our favourite summer style trend – stripes! Wearing comfy poncho-style dresses, both of them looked super chill.

Having a gala time in Phuket, Mira took to Instagram, sharing a video of her cycling along with Shahid. The star wife captioned it,  ‘Monkey on my back.’ Now how can we not call this #familygoals?! While Mira claims to be the strict one, we think she does a great job of bringing that fun element to parenting!

Earlier too, Mira posted a picture of her and son Zain twinning in off-white sweaters. Don’t they look super cosy on the couch?

The mother of two who called herself the coolest mom, coloured her daughter’s hair. Knowing how vocal the internet is, Mira received a lot of flak from her followers, but she handled it like a pro! Whether you subscribe to her parenting methods or not, you can’t deny that she is a cool Insta mommy!

Also read: Mother’s Day 2019: These Photos Of Celebrity Moms With Their Kiddos Is Absolute Love

Shahid and Mira tied the knot in July 2015 and welcomed their first child Misha in 2016. Zain was born two years later in 2018.