Wait, Why Is Mallika Sherawat At Cannes? It’s Not For A Movie But We Have All The Deets! 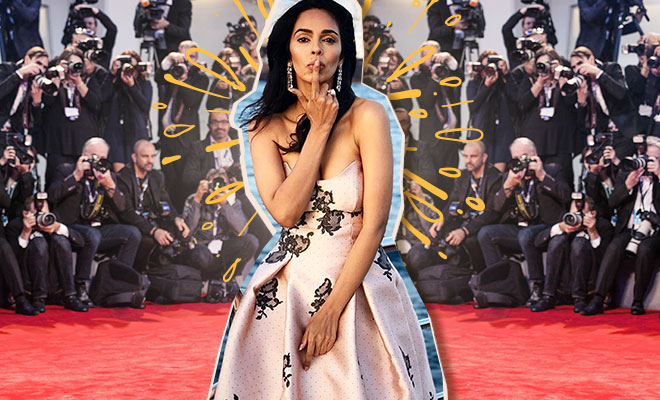 The 2019 Cannes Film Festival has officially kicked off and we have been hit by the first wave of glam red carpet looks. While we did see some desi moments at the carpet (a Sabyasachi design made an appearance), there is a wait before Indian celeb steps onto it. One of those celebs is Mallika Sherawat, who has been a constant at the festival since 2005!

Now if like us, you’re confused why Mallika is at the French Riviera because you haven’t heard of a movie coming out, then worry not, we did some digging and found out the reason for her making an appearance, year after year. The hugely successful and controversial flick Murder put her on the map, the very weird Hisss put her on the red carpet and she has been riding that wave ever since.

This morning, the actress put up a video on Instagram revealing her first look for the Cannes red carpet, sans hair and makeup and our first thought was, why is she at the Cannes? A question we had for Hina Khan as well.

It’s not for a movie, so we don’t have to be subjected to another one of those fantastical but very awkward adventures but for another reason, which we frankly prefer more.

The Cannes Film Festival is more than just a cinema. It also includes photo calls and panels over various social issues. That is where Mallika comes in. The actress has been a big voice for the cause of the prevention of human trafficking.

Representing the NGO Free A Girl India, The actress has been outspoken about the societal ills of child trafficking and rape in the country. Last year, Mallika locked herself in a cage to make a point about the issue and it certainly caught everyone’s attention to her and more importantly, the cause.

She joins and has lead, a panel dedicated to this issue at the festival. We are glad that the actress is bringing this conversation to a global platform. That and the undeniably pretty gowns she has added to her list of Cannes fashion moments.

We are looking forward to what she has planned to do at the festival this year. Another social experiment? We will be keeping an eye out for that!