Malaika Arora’s Son’s Reaction To Her Relationship With Arjun Kapoor Is So Mature. We Could All Learn From The 16-Year-Old! 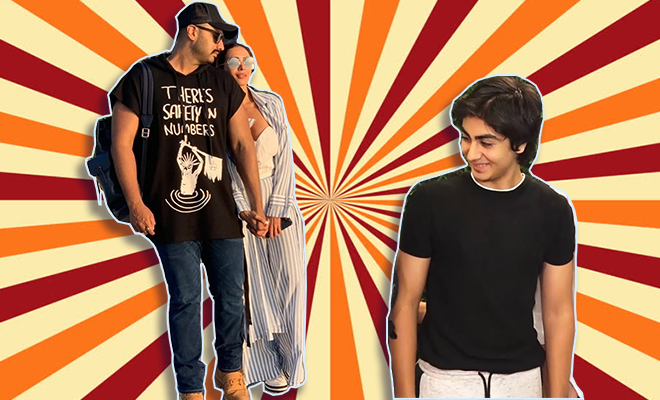 Malaika Arora and Arjun Kapoor has been dating since quite a while now, and things seem to be getting rosier by the day. The gorgeous duo look great together, even if they have a significant age gap. And that’s something people have been having a hard time to wrap their heads around. It’s not even our business but the internet , time and again, deems it important to comment on it. The couple remains unperturbed by this and is in quite a happy space.

Just ahead of Arjun Kapoor’s birthday, the couple flew to New York for a vacay! The couple has been posting aww-worthy pictures on their Instagram. This was the first time, Malaika shared a lovey-dovey picture with boyfriend Arjun on her Instagram and now we are hoping her feed will soon be flooded with adorbs pictures of them!

Clearly, they are in a space where they can shout from the rooftops how deeply in love they are! So in an interview with Hindustan times, when she was asked how her son has reacted to the relationship, she gave an honest reply. “I believe the best way to approach any situation is with honesty. It’s important to tell your near and dear ones what’s happening in your life and then give them time and space to understand and process things. We have had that conversation and I am so glad that everyone is in a much happier and more honest space today.”

We’re glad that the near and dear ones of the couple are being supportive of their relationship. And those who aren’t, Malaika has no f**ks to give! When she was asked about the age difference between them, she said it doesn’t matter! “The age difference doesn’t really pop up when you are in a relationship. It is about two minds and hearts connecting. Unfortunately, we live in a society that refuses to progress with time. An older man romancing a younger girl is hailed everywhere, but when the woman is older, she’s called desperate’ and a buddhi’. For people who think like this, I have just one line: Take a flying f***.” We love this woman! She has always been fierce and bold about her choices, and all of us should take inspiration from her. Age gap has worked for Saif and Kareena, Milind Soman and Ankita Konwar and a lot of peeps! So can we please keep the pressure off them?

Even Arjun Kapoor wants this topic to die down now, “I wouldn’t even want to speak about this and give it importance. It doesn’t matter to me, so I don’t want to justify anything.” Meanwhile, all of us have been pinning hopes on them tying the knot asap, but the couple are not talking about it so maybe we will just wait and watch.

ALSO READ: Malaika Arora And Arjun Kapoor Have Made Their Relationship Instagram-Official. We Can’t Wait To See Some Lovey-Dovey PDA!

On the work front, Arjun is working on Ashutosh Gowariker’s historical drama Panipat, which also stars Sanjay Dutt and Kriti Sanon in key roles. He was last seen in India’s Most Wanted.