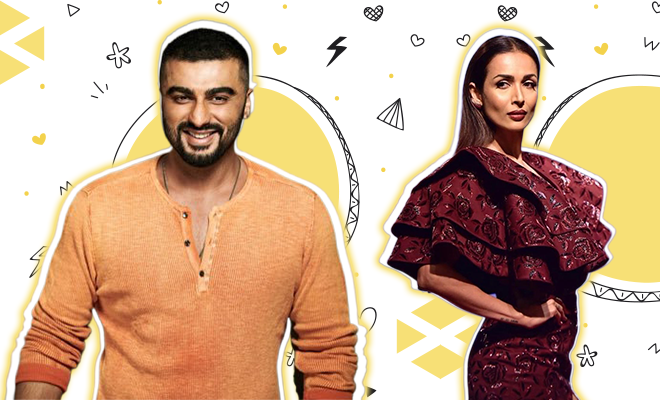 Malaika Arora and Arjun Kapoor are a couple who have us following their every move. And not only because we are nosy. Okay, mainly because of that, but also coz they’ve been so interesting and irreverent. And also because they don’t shy away from some digital PDA, the kind that’s fun and interesting and makes us want to stalk them on a particularly boring day. Arjun Kapoor is known for his hilarious comments on Malaika Arora’S and his close friend’s pictures on Instagram. That’s undoubtedly entertainment in itself but this time it was Malaika Arora who left a cheeky comment on Arjun Kapoor’s candid picture on Instagram.

Also read: Arjun Kapoor Doesn’t Care About The Age Gap Between Him And Malaika Arora. Let’s Back Off!

In the picture, Arjun Kapoor is seen looking at his reflection in a handheld mirror. Sharing the picture Arjun wrote, “Mirror mirror (not) on the wall!!! #aboutlastnight #lakmefashionweek2019 #vanitywalapic.” Malaika Arora didn’t miss this chance to pull Arjun Kapoor’s leg and commented on the post, “Wah kya humour…”

Clearly, these two share a relationship that goes beyond just leaving hearts on each other’s pictures.

The couple have been dating since 2 years now and the duo are at their happiest phase in life- and it’s obvious when you see them. Arjun Kapoor, who was last seen in India’s Most Wanted, was last seen walking the ramp at Lakme Fashion Week for his close friend and designer Kunal Rawal. Arjun Kapoor sported an ash grey bandhgala deconstructed jacket with dark pants.

Malaika was also at Lakme Fashion Week walked for designers Diya and Rajvvir. The stunning diva looked mesmerising in a burgundy coloured top which had a plunging neckline and gorgeous huge sleeves that stole the show. This she wore with a thigh high slit skirt on the same pattern. Malaika Arora, as always, looked like a goddess.

We wished the two to could walk the ramp together!

Kim Kardashian Fans Call Her Out On Her Latest Photoshopped Picture Featuring 6 Toes And It’s Funny.