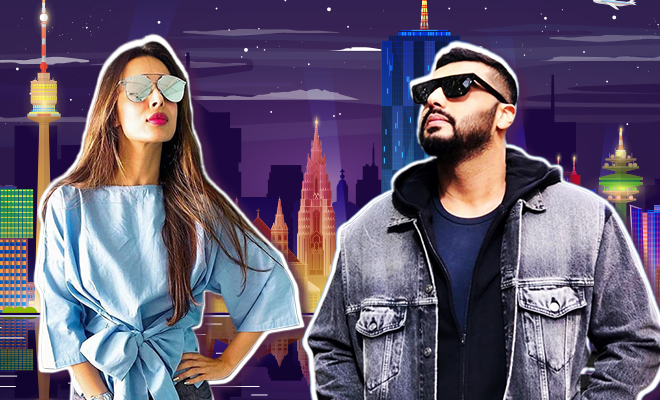 When I was a teenager, there was a series of lies that I had to keep up with on the daily. From whether I ate my entire lunch to the boy who I was hanging out with, there was quite a lot that I thought my parents weren’t ready to know about yet. And this habit hasn’t died. I still sometimes feel the need to sneak around with my beau, and that is a thrill on its own. But I’d be lying if I didn’t admit that having your relationship out there. to not have to hide is the best feeling ever. Something that has deeply resonated with Bollywood’s latest IT couple, Malaika and Arjun, who have been seeing each other romantically and have now told the world and its wife.

Also Read : Malaika Arora Leaves A Snarky Comment On Arjun Kapoor’s Picture And We Love How Cheeky They Are

From earlier shrugging off any and every rumor about dating each other, the couple finally took a stand for their love, and announced that they were, in fact, seeing each other. They also mentioned that the reason they didn’t admit to the relationship earlier was because they feared public and media scrutiny. However, ever since the couple has come out of the closet, there has been no looking back for the two.

From giving us major couple goals, to being each others’ cheerleaders, these guys have got it down pat. Their Instagram banter is even cuter – with cute captions and sometimes even cuter comments that follow in the comment section – the two have honestly made us go all gaga over their love. Especially with their recent set of Insta-stories and posts that are cute, romantic and fun, all rolled into one. Having the time of their lives in Austria, their stories have been the perfect testament to the couple’s dynamic.

From Arjun clicking the best pictures of Malaika on this love-cation to dropping the most adorable comments on her photos, he is clearly upping the game for fellow boyfriends out there. Things got especially ‘aww’ worthy when Arjun’s uncle, Sanjay Kapoor has also decidedly stepped into the game by commenting, “Your in-house photographer is doing a good job @malaikaaroraofficial.”

Later, Arjun Kapoor was seen posting stories on his IG account of two heart shaped balloons, with captions of old SRK songs, ‘Do dil mil rahe hain magar‘ cleary hinting at what has been brewing between this adorable couple. Safe to say, the two are head over heels in love with each other and aren’t scared to shout it off the rooftops, or in this case Austrians coffee shops, any longer!

Also Read : Amrita Arora Opened Up About Malaika Arora And Arbaaz Khan’s Divorce And Said They Share A Friendly Relationship