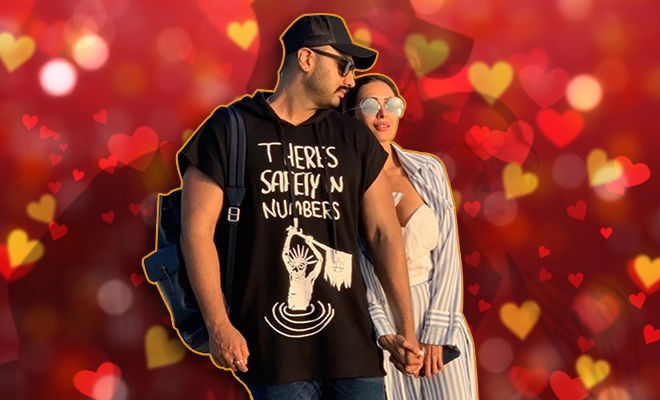 Malaika Arora And Arjun Kapoor Have Made Their Relationship Instagram-Official. We Can’t Wait To See Some Lovey-Dovey PDA!

Malaika Arora and Arjun Kapoor started dating  and have been going quite strong. They have always supported each other, and stuck together inspite of the criticism the naysayers have been throwing their way. The gorgeous duo recently took off to holiday in New York ahead of Arjun Kapoor’s birthday, and were seen enjoying the much-needed romantic getaway. And while, they have often been spotted together, Malaika made her relationship Instagram-official only on Arjun’s 34th birthday.

She uploaded a loved up picture of them holding hands, with a beautiful message. Malaika wrote a romantic wish for Arjun: “Happy birthday, my crazy, insanely funny and amazing Arjun Kapoor. Love and happiness always!”

That picture is so cute, and we’re happy that it’s now Insta-official. We love that feeling – you know when you’ve been thinking where this is going and bae puts up a picture with you on social media. Because in today’s times, is it really official until it’s announced on social media? If your bae hasn’t done it yet, maybe you can send the post to him and you know, drop not-so-subtle hints.

While the duo has been dating since a while, it’s only recently they opened up about it. Arjun had revealed that they made it official because of the dignity and support they have received from the media. Of course, the couple is much loved, and the age gap matters to neither us (who are we anyway?) nor them!

In fact, we can see their love getting stronger and everyone’s been kinda wanting to see them get married someday. However, that’s probably not happening anytime soon. “The day I decide to get married, I will not hide it from anybody. It is not something that I want to hide. If I’m open about my relationship, there’s no reason for me to want to hide my marriage. Speculation is normal because that is the profession we are in,” said Arjun in a recent interview with Times of India.

ALSO READ: Katrina Kaif And Anushka Sharma’s Messages For Arjun Kapoor For His Birthday Are Hilarious And Cute!

On the work front, Arjun was last seen in Raj Kumar Gupta’s India’s Most Wanted. Currently, he is working on Ashutosh Gowariker’s historical drama Panipat, which also stars Sanjay Dutt and Kriti Sanon in key roles.