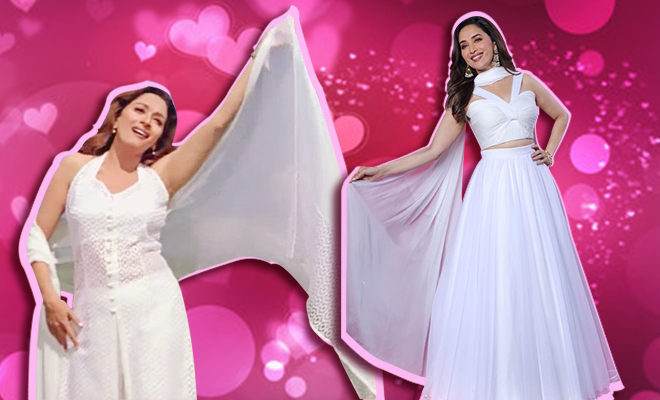 Madhuri Dixit Nene’s Recreated Her Dil To Pagal Hai Look And Now We Want Our Someone Who’s Made For Us!

For a 90s child, anything that takes us back to those days holds a special place in our hearts. The jalebi kid from the Dhara ad, who was running away from home and returned only after being tempted with food, that guy is just everything man. Not much has changed, except that he is now the biryani boy from Uber Eats ad.  His world still revolves around food, much like ours. Tom & Jerry stopped making new episodes, and are probably friends now, after all these years. Or not. Recently, Madhuri Dixit Nene, the actress who danced her way into our hearts, shared a picture of her that took us back to her Dil To Pagal Hai days! And man, we all wanted to meet our special someone right away. Except in real life, instead of dates, we are sitting at home in tattered pyjamas and netflixing!

Madhuri Dixit Nene is currently busy judging the dance reality show, Dance Deewane 2. During the show, she wore a white Swapnil Shinde minimalistic lehenga. Her blouse had halter neckline, and she topped it with a dupatta, very similar to her looks in Yash Chopra’s Dil To Pagal Hai. In fact, she posted a picture of this look on her Instagram feed with the caption: “Dil To Pagal Hai #DanceDeewane2”

Honestly, at first glance we actually thought it was a throwback picture. It took us another look to figure that this is a current day picture, except that the 22 years just don’t show on her. She is still as fit, while some of us here, can’t even fit into the jeans we bought last year.

Madhuri, who had even Prabhu Deva impressed with her moves, is creating waves at the dance-based reality show. In fact, when Hrithik Roshan had come on the show, to promote his upcoming movie Super 30, he was totally fanboying over Madhuri. He took to Instagram to express his feelings about the legend that Madhuri is, “Dancing with Madhuri Dixit had me shuffling in my head between assistant and hero. Thank you mam for encouraging that clapper-boy, he still aspires to be your hero. #comingsoon #dancedewane #super30 @madhuridixitnene.”