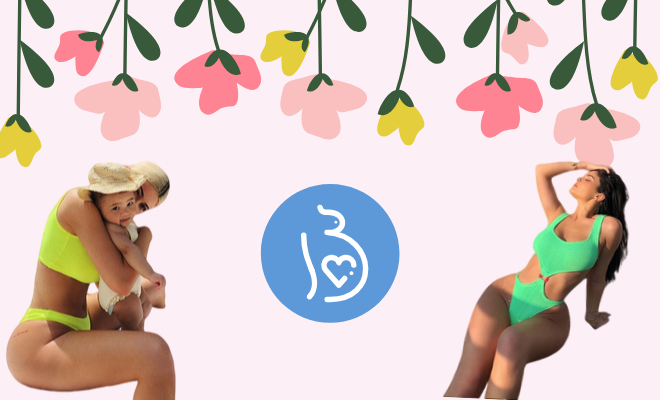 I am 22 right now and my problems involve stuff like ‘why is this commute so expensive?’ and ‘Great, only two days till I get my salary so I can afford shampoo.’ With every step, we find ourselves at new crossroads and it can get highly frustrating, but you already know this. At this time, the last thing on our mind is having a baby (unless its an accident, oops!) But if there is anything, we have learned by watching 17 seasons of Keeping up with the Kardashians is that they don’t function the way the rest of the world does. So, when Kylie Jenner got knocked up at 21, it didn’t come as such a shocker. But no one really thought of her going through the usual changes that happen post-pregnancy (thanks to her kick-ass social media game) and that is why when she opened up about embracing her stretch marks, we were so blown away. I mean, I can’t even begin to imagine taking care of a kid at my age, but then again, the reality star with a billion-dollar makeup empire has always proved she isn’t wired the way we are.

Kylie Jenner and her former boyfriend Travis Scott welcomed their daughter Stormi Webster into this world early last year and she really is one of the cutest little munchkins ever- Stormi, not Kylie. Kylie who says she always wanted to be a young mom participated in a tell-all question-answer round on Instagram with her 148 million followers recently. It was clear rather quickly that the central theme of the “ask me anything” game was her pregnancy. One fan asked her whether it was hard for her to get back into shape after her pregnancy to which she replied with an adorable picture of her and Stormi saying, “I snapped back pretty fast but it was never the same and still isn’t,’ she wrote. ‘Once I accepted the change my confidence came back. It just takes time.’ It’s so refreshing to see the young star talking about issues that people shy away from.

Another fan asked her if she had any stretch marks during her pregnancy and if she did, how did she get rid of them? To this, she replied saying that she did have stretch marks on her breasts, butt and thighs. Kylie also added that she just accepted them as little gifts from her daughter Stormi. If this doesn’t make you’ll go “aww,” I really don’t know what will.

Someone also asked her what her favourite part about being pregnant was, to which she replied saying there is nothing more special than feeling your baby move and grow. We can only imagine how it must feel to experience so much at such a tender age. During the Q&A session, someone also asked her what other names she was considering for her daughter, to which she replied with a very normal name much to our surprise. She said, “Rose, I still love that name.”

The Kardashian-Jenner clan is famous for being famous, but no matter how much you judge them you can’t deny the fact that they have a certain charm that has attracted the whole world. Though Kylie is the youngest she really is the most accomplished of them all and we can’t help but appreciate the way she is nailing every sphere of her life. It is now clear we have much to learn from her!

Kim Kardashian Fans Call Her Out On Her Latest Photoshopped Picture Featuring 6 Toes And It’s Funny.