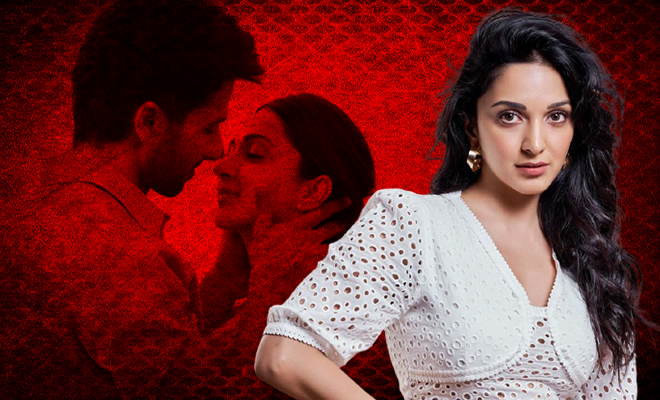 Kiara Advani Defends Kabir Singh Saying That It Was Unfair For People To Reduce It To Merely One Slap. Erm, We Did Not

Over the years, Bollywood has seen its fair share of controversial movies. However, the most recent movie to come under the scanner was 2019 Shahid Kapoor-starrer Kabir Singh. I don’t know if you’ll have watched the movie but it generated a lot of buzz for glorifying toxic, abusive and excessively controlling relationships. It created so much controversy that people wanted to Boycott it all together. Not to mention that its actors and creators are defending the movie even today. The most recent instance has been Kiara Advani saying that it was unfair that people reduced Kabir Singh to just one slap. Erm, did she watch the movie after she was done acting in it? It’s not unfair and “one slap” is not our only problem.

Kiara opened up about the backlash the movie faced while in conversation with Neha Dhupia on her show No Filter Neha. She said that she was aware that Kabir Singh would generate backlash.

She said, “I was happy when Guilty came out and Good Newwz came out and people were like okay, wow, she’s a versatile actress and you know I’ve got all the critical acclaim for. But, with Kabir, I think, it was, I was very nervous before the film release because I was aware that section of backlash would come because we saw it happen with the first film. So, we knew it would happen.”

Wait a minute. So, Kiara knew that there would be backlash which means she knew that both the movies, Arjun Reddy and Kabir Singh, were problematic. And she went through with it anyway? Wow, that’s nice to know.

Kiara went on to say that according to her, the final scene justifies everything in the movie. She said, “For me, that scene showed her strength, she wasn’t just going to just go back to the man she loved. She decided to raise a child on her own, she left, she left him, she left the man her parents forced her to marry. I just felt she was not the woman that maybe other people saw her be till that interval and I felt unfortunate for those people who did have the comments of misogyny and all of that which of course there is a part of the character but that’s something that was always known to the audience when you see it in the promos also.”

She went on to say, “Unfortunately, some people just made the slap, the whole movie about one slap. It was not about one slap. That’s not something that I stand for. And, that’s not something that I would ever stand for and that’s not something Preeti stood for, either. Because she left him, she’s like no way, you have ruined whatever we’ve had this entire issue and she doesn’t go back to him and he comes finding her and even in that moment she doesn’t want to see his face but they have a confrontation and that’s what their climax scene, I think was 20 minutes long, where everything is discussed, argued and I guess, love is love at the end of the day. They both come back together.”

Also Read: From Kabir Singh To Every Emraan Hashmi Movie, Tweeple Are Listing Bad Movies With Fabulous Music And There Are So Many Of Them!

Okay, now I really think Kiara is talking about some other movie. Why is still trying her best to justify Kabir Singh? Look, we at Hauterfly have been extremely vocal about our problems with the movie. They portrayed a problematic character in a very rosy way, glorified toxic masculinity and completely ignored the concept of consent. So yeah, the movie was not reduced to merely one slap there were a thousand other things wrong with it. Besides, even one slap should not be accepted. And all the backlash is not unfair.

Also, I don’t understand why Kiara is raving about her character Preeti. From where we were sitting, she displayed a complete lack of spine. And the fact that she would go back to Kabir Singh at the end after everything he did sends a horrible message in itself.

It’s high time we move on from Kabir Singh. The cast and crew need to stop defending it over and over again. The truth is that movies like this one have long-lasting effects on the audience. In the last year, we have heard of multiple cases of violence that were inspired by Kabir Singh. Actors and filmmakers need to keep in mind to not glorify and then defend such behaviour.

Vidya Balan Defends Movie Kabir Singh, Says Actors Should Be Allowed To Do What They Want. So They Have No Social Responsibility?